We have seen how IPP has been working hard to get back India’s heritage lost to international smugglers. Every year scores of arts and artifacts are being stolen, smuggled and sold in the international market. We have also thrown a look at the modus operandi of these organised racketeers.

What ails our system? How are such elements finding it easy to smuggle such precious national wealth? What efforts are being taken or need to be taken to stop such incidents? Do we have any success stories? What has been IPP’s contribution? While we may not be able to answer all these questions, we shall surely attempt to bring you tales about stolen artifacts, how they have been traced and their journey back home (if there is one). We shall be using the blog http://poetryinstone.in/ as our reference point.

India is a prime target for artifacts thieves because of its long history that goes back several centuries and the huge number of heritage articles that is found in its numerous temples. In the absence of a dedicated department for identifying fakes, tracing stolen artifacts and tapping in diplomatic channels to get them back to the country; the task becomes that much more difficult.

The first obstacle is identifying fakes. Smugglers substitute the original with fakes and by the time the theft comes to light the original artifact has changed several hands. Another problem is in India there is no photographic evidence of ancient artifacts. Since these are not documented identifying original and fakes is very difficult. The time lapse between the theft and sale also causes setbacks.

Sivapuram Natarajar and other bronzes

Sivapuram is located in Thanjavur district and it was here that 6 bronze statues belonging to the Chola era were discovered in 1951. Annamuthu Padayatchi unearthed the idols of Natarajar, Thirugnanasambandar, Somaskandar, Pillaiar and two Amman (Devi/Parvati) from his field. These were handed over to the Sivapuram temple as per the provisions of the Indian Treasure Trove Act wherein the temple, which comes under State control, has ownership over such treasures.

How did two (possibly more) of these idols then land at the Norton Simon Museum? The next part of this saga unfolds in the workshop of Ramasamy Sthapathy of Kumbakonam. He was entrusted with the work of repairing the idols in the year 1954 by the temple trustees. In 1956 a person named Thilakar and his brother Doss lured Ramasamy to part with the originals and substitute them with fake idols. From Kumbakonam, the valuable artifact, Sivapuram Natarajar bronze, then made its way to an art collector Lance Dane’s house in Bombay. The idol was in Dane’s possession for the next ten years.

It was only in the year 1965 that this theft was brought to light by Mr Douglas Barret of the British Museum. When Barret visited the Sivapuram temple he discovered that the originals had been substituted and he made a reference to the same in his book. He further stated that the original Natarajar idol was in the possession of an art collector in Bombay. The idol kept changing hands till it was purchased by the Norton Simon Foundation from Benn Haller of New York. As per information given in the http://poetryinstone.in/ blog in 1973, ‘The Metropolitan Museum of Art (MET) in New York began planning an exhibition of the Norton Simon Foundation’s Indian art collection. Through the publicity surrounding the show, the Indian Government learned about the statue’s presence in the United States. This was the first time that the Indian Government had traced the object since its theft. Consequently, the Indian Government wrote a letter of protest to the MET and, with the help of the United States Department of State, blocked the show’s opening.’

Diplomatic channels were opened up and after a prolonged struggle the Indian Government reached an out-of-court settlement with the Norton Simon Foundation. As per the settlement, the Government got possession of the Natarajar statue. A case was filed against Dane, Thilakar, Doss and Ramasamy. The said case was closed with the statement ‘all accused have been arrested. There is no information about the remaining idols’.

Sri P.R. Srinivasan published his book ‘Bronzes of South India’ in 1963. This book had the photographs of the original idols including Natarajar and Somaskanda (except the Amman bronzes). His book states that the idols were under worship in Sivapuram temple. It was, however, Douglas Barret’s 1965 book ‘Early Chola Bronzes’ that acted as the main trigger point in bringing this theft to light. An article written by Douglas Barret (in 1978) was published in the Marg magazine in the year 1997. This article makes a direct reference to the importance and presence of Somaskanda bronze at Norton Simon Museum.

The agreement to return the Natarajar to India was signed between the Norton Simon Museum and Indian Government in 1976 and the said idol was brought back to its country of origin after a decade, in 1986. The closed case file states ‘there is no information about other idols’. However, the above-mentioned Marg article states in no uncertain terms that the idol of Somaskanda and others were indeed at the museum. What were the terms of the ‘out-of-court-settlement’ remains unknown and we can only speculate as to whether or not the authorities knew about the whereabouts of the idols.

The IPP blog investigated the case further by comparing the photographs at its disposal with the online archive of the Norton Simon Museum. The biggest giveaway of the fake idols is that the forger namely Ramasamy Sthapathy has not made a perfect replica. As of now all we can say is possibly the remaining idols are also in the possession of the Norton Simon Museum and efforts must be taken to get them back.

Links to the article: 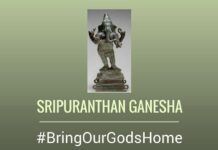 The saga of the elephant headed God – Sripuranthan Ganesha 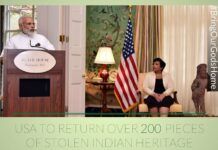