The high number of undertrial prisoners has created several problems for the justice system, a most important being the overcrowding of jails

The government has set up a Bail Fund for the benefit of undertrials so that they can avail of the bail that is legally due to them. This will help lakhs of undertrials, many of whom have been awaiting trial for years. Some have even served longer periods behind bars than they would have if they had been convicted of the crime they are accused of.

The proposed fund is “for undertrials who have been granted bail by the court but remain unable to fulfil it due to inability to deposit cash bail,” an official told this correspondent. “In its pilot phase, it is proposed that the fund caters to 11,916 women undertrials languishing in jails across the country.”

The Bail Fund is the culmination of a process that began in February last year when the Ministry of Law & Justice wrote to 24 high courts requesting strict implementation and monitoring of Section 436A of the Criminal Procedure Code by the district authorities. As per Section 436A of the Criminal Procedure Code, “Where a person has, during the period of investigation, inquiry or trial under this Code of an offence under any law (not being an offence for which the punishment of death has been specified as one of the punishments under that law) undergone detention for a period extending up to one-half of the maximum period of imprisonment specified for that offence under that law, he shall be released by the Court on his personal bond with or without sureties.”

Undertrial review committees were stipulated to be constituted in all districts.

According to official data, two of every three prisoners are undertrials. In 2015, there were 419,623 prison inmates, of whom 282,076 were undertrials.

In July last year, Amnesty International had recommended to the government to “set up a computerized database and tracking system for prisoners in all prisons, which will regularly alert prison authorities on undertrials eligible for release which will be maintained and updated at the state-level.”

The high number of undertrial prisoners has created several problems for the justice system, a most important being the overcrowding of jails. In March, the Supreme Court had slammed state governments and Union territories (UTs) for poor jail condition, saying prisoners “cannot be kept in jail like animals.” It issued warnings to the police chiefs of all states and UTs of contempt for non-compliance of its earlier orders to check overcrowding of prisons.

According to the provisional figures recently released by the government in Rajya Sabha, on December 31, 2016, India has 1,412 jails with a capacity of about 3.81 lakh. They, however, house 4.33 lakh prisoners—that 114 percent of their capacity. 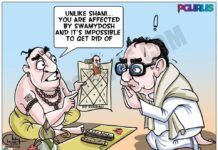 Chidambaram’s kundli will be decided by Swamy 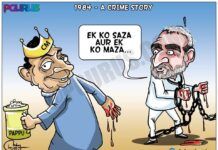