Haryana’s first BJP dispensation headed by Chief Minister Manohar Lal Khattar may not have much to write home about in terms of its achievements in 13 months in office but the ‘devout’ government is all set to convert mythology into reality for the people of the state.
After having made its intention clear that it will go all out to dig out the hitherto invisible Saraswati river, the religiously-minded Khattar government has gone a step forward.

Khattar, who is chairman of the Haryana Saraswati Heritage Development Board (HSHDB), has issued directions that the excavation work of the river from its origin in Yamunanagar district to Kurukshetra, the land of the epic Mahabharata, be completed on a “war footing”. Construction of a palaeo-channel, digging of bore wells, carbon dating and other works, with a budget of Rs.3 crore ($450,000) in the first phase has already been initiated.

“A three-day Saraswati Mahotsav would be celebrated on the occasion of Basant Panchmi (next February) in three districts, namely, Yamunanagar, Kurukshetra and Kaithal, in which information regarding the Saraswati would be given to people and literature would be distributed. Also, some scholars would inform people about the findings done so far about the Saraswati,” Khattar said here.

The Saraswati river, considered sacred in Hindu religion, finds mention in ancient Hindu scriptures like the Rig Veda, Mahabharata, Ramayana and others, giving credence to the belief that it existed during those times.

To send out a clear signal that the Khattar government means serious business, a steering committee has been constituted under Haryana Chief Secretary D.S. Dhesi to deal with any issues arising in the rejuvenation work.

committee has top officers, including additional chief secretaries and principal secretaries of public works, tourism, agriculture, irrigation, cultural affairs, town and country planning and revenue departments,” a senior officer told IANS.
“Provision would be made to keep books, research papers and other material related to the Saraswati in the district libraries of Kurukshetra, Kaithal and Yamunanagar so that information could reach the masses. Digital libraries would also be set up in districts,” he added.
The Khattar government, buoyed by the “discovery” of water in April at just seven feet in Rohlaheri village of Yamunanagar district during digging work to find the mythological river, has already pledged Rs.50 crore for the excavation project.

“The board will conduct meticulous field work to unearth and understand the past and the present content of the Saraswati heritage in Haryana for exposition of cultural patterns and values. It will help to preserve and promote the various archeo-cultural facets of the Saraswati Heritage Area,” a note of the state cabinet stated recently.

Khattar, who has been a Rashtriya Swayamsewak Sangh (RSS) ideologue, and other BJP ministers have been quite inclined to dig up the mystery behind the mythological river, given its significance in Hindu mythology. 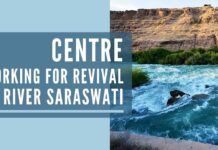 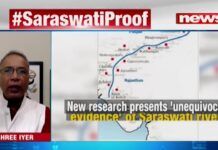 Women series – Part 2: Can India be called a Feminine Economy?