Why Centre cancelled the FCRA license of 2 NGOs headed by Sonia Gandhi?

Union Home Ministry cancelled the Foreign Contribution Regulation Act (FCRA) licenses of the Rajiv Gandhi Foundation (RGF) and Rajiv Gandhi Charitable Trust (RGCT), headed by Sonia Gandhi. The decision was taken by Home Ministry on Saturday evening after the probe initiated by it in July 2020 after a series of violations in accepting foreign donations by the two NGOs controlled by Sonia Gandhi and her family members. The Ministry of Home Affairs (MHA) formed an Inter-Ministerial Committee to probe into the affairs of the two NGOs in July 2020.

Notices informing about the cancellation of the FCRA license have been sent to the office-bearers of RGF and RGCT, said MHA officials. Former Congress president Sonia Gandhi is the chairperson of both NGOs. Other trustees include former Prime Minister Manmohan Singh, former finance minister P Chidambaram, Rahul Gandhi, and Priyanka Gandhi Vadra. Montek Singh Ahluwalia and Suman Dubey are also trustees of these NGOs headed by Sonia Gandhi.

In 2015, BJP leader Subramanian Swamy filed a complaint to Urban Development Ministry on the illegal use of prime land captured by the Rajiv Gandhi Foundation. The prime land was allotted to the Congress party (AICC) to construct a headquarters in 1988. But in June 1991, Sonia Gandhi formed Rajiv Gandhi Foundation and occupied the land building meant for the Congress party.[1]

BJP raised charges against the NGOs for accepting money from various embassies including from China, and fugitives like Mehul Choksi, and Zakir Naik. BJP leader Subramanian Swamy filed another complaint on probing the opening of the Rajiv Gandhi Foundation office in the tax haven Seychelles. After the complaints, in 2020, the Foundation’s FCRA license was renewed for shorter periods of three to six months. 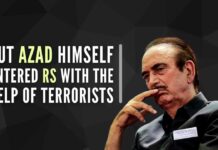 But Azad himself entered RS with the help of terrorists