Team PGurus had reported back in February of this year conclusive proof that Hurriyat leader Syed Ali Shah Geelani and Mirwaiz Umar Farooq are in constant touch with Pakistan spy agency ISI’s Lieutenant-Colonel Tanveer Ahmad. In this post, we bring you a list of the assets that have been unearthed thus far.

One by one the castles built in the high air are crumbling down and more and more skeletons are tumbling out of their closets.

Since March 1993, when All Parties Hurriyat Conference (APHC) came into being the octogenarian had spent the majority of the time while remaining under house arrest under the watchful eyes of a small army of state policemen.

During these eventful years of his life, he was allowed to travel outside Kashmir valley during different phases but his visits remained restricted to the national capital of India-New Delhi. On a few occasions, he did interact with the Pakistan High Commissioner in New Delhi and created a storm in the tea cup.

Mostly he visited Delhi for routine health checkups and whenever he needed medical intervention to sustain himself.

Geelani is learnt to have amassed huge wealth in the form of prime properties within and outside Kashmir Valley during the same period much to the chagrin of law enforcing agencies. All those people working on the ground are trying to find out any records available with the Income Tax department with details of Income Tax returns filed by these separatists. So far no such document has come out in the public domain.

But it appears that all these separatist leaders who enjoyed proximity with a section of leadership in New Delhi have now run out of luck.

One by one the castles built in the high air are crumbling down and more and more skeletons are tumbling out of their closets.

How can someone, who has been under house arrest for the 24 years, amass so much wealth?

Ever since the National Investigation Agency (NIA) began crackdown against these separatists and their sympathizers to track down the source of terror funds they are spending sleepless nights for fear of getting exposed in the eyes of their own supporters.

On ground sleuths of NIA have so far managed to track down a list of properties worth crores of rupees which are directly owned by him or one of his close relatives.

As per the dossier, Geelani’s son Naseem Geelani looks after real estate matters of the family.

Geelani’s son-in-law Altaf Funtoosh, who has been looking after his affairs for year, owns land in Dompora Sow. Altai Funtoosh, Advocate Shahfi Rishi and his nephew Yaseer Rishi (MLC) own around 100-150 kanals of land in Sumbal, Zainkund-Bandipora Road.

Till date four Benami properties have also been discovered and the subjects will be questioned about the same.

How can someone, who has been under house arrest for the 24 years, amass so much wealth? 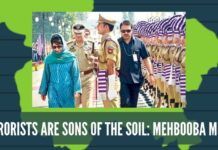 Terrorists are sons of the soil: Mehbooba Mufti