The CAG fixes the PSU’s Chairman and Managing Director M Ayyappan for the bad decisions including the controversial iron ore export. CBI had jumped into action in early 2009 and the company’s top management was protected by the Health Ministry by not giving Sanction for Prosecution. It is the worst kept secret that the HLL Lifecare is a milch cow for those who rule the Health Ministry. Top Ministry officials and Health Ministers from times immemorial were taken care of,  by providing all sorts of luxuries by this public sector undertaking.

Ayyappan who had already got a three-time extension as CMD is now facing heat from Prime Minister’s Office after the CAG’s findings and adverse CBI and IB reports. Latest heard is that Prime Minister Narendra Modi who is also the head of Appointments Committee of Cabinet has decided not to give the fourth extension to this controversial officer, by rejecting Health Ministry’s recommendation. Ayyappan’s tenure is expected to end by this May and it is alleged that the lobbying machinery is working overtime to accommodate him somehow. Let us see how PMO acts.

It is hard to imagine why HLL diversified into iron ore exports to China, losing Rs. 6.84 crore of public money in the process. For the details, see Table 1 below:

[dropcap color=”#008040″ boxed=”yes” boxed_radius=”8px” class=”” id=””]T[/dropcap]his shows that HLL had engaged with some unprofessional shipping company and vendors. CBI in its earlier report clearly said several shipments of iron ore was bogus. The fake shipping bills were created from Bellary and this kind of fraud was detailed in several reports including the findings of Justice Santosh Hegde on Bellary lootings. The table on money lost from iron ore shipping shows several dishonoured cheques and there is no need for super-human intelligence to understand that top management of the PSU colluded with shipping vendors and minor contractors.

UPA-2’s Health Minister Ghulam Nabi Azad stonewalled the CBI from acting against these errant officers of HLL Lifecare Limited. The iron ore export took place during UPA-1 when Anbumani Ramadoss was Health Minister. How a PSU head of a healthcare company funded iron ore export is a million dollar question! But the fact remains that the NDA’s Health Minister J P Nadda also supported the controversial officers of the PSU and even recommended a fourth extension to CMD Ayyappan. This shows how deeply rooted the corruption and nepotism are, in India’s Public Sector Undertakings.

See the interactive chart below detailing the steep decline in sales of flagship product Moods Condom. Most of the products are facing around 90 percent decline in sales for the past three years.

The entire CAG draft findings to which the HLL Lifecare management has still not given sufficient answers is here:

This document is reproduced here for the understanding of the younger generation entrepreneurs, management students, administrators to know how India’s PSU has been badly governed and mismanaged by a small coterie of conniving incompetents, at the expense of the public exchequer. 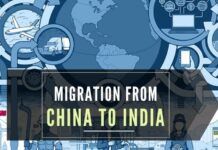 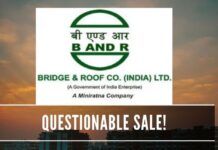 Why is GOI disinvesting a profit-making PSU Bridge & Roof? Are Construction companies eyeing to plunder a public asset?