It is an irrefutable fact that only Hindu Institutions and Charities suffered due to continuing injustice and refusal to cloak Hindu Sampradaya with the protection that Article 26 offers.

The Denominational character of a Temple or a Hindu Place of Worship were never the subject matter before the Supreme Court in the Shirur Mutt Case.

From 1954, Supreme Court rulings on the Fundamental Rights under Article 26 of the Constitution became more and more constricted, if not totally elusive, to Hindu Denominations, Sects, and Sampradayas. So much so, that after the majority judgment by the Constitutional Bench of the Hon’ble Supreme Court in the Sabarimala Temple matter, Article 26 now appears to be a Fundamental Right that is available only to minority religions or non-Hindus in India.

Whence this aberration came to be manifested? How did Hindus came to be deprived of an extremely important set of fundamental rights that allow other believers or sects to decide matters of religions by themselves and to administer their religious institutions and charities without any external interferences or control?

Article 26 of the Constitution runs as follows:

Subject to public order, morality and health, every religious denomination or any section thereof shall have the right–

(a) to establish and maintain institutions for religious and charitable purposes;
(b) to manage its own affairs in matters of religion;
(c) to own and acquire movable and immovable property; and
(d) to administer such property in accordance with law.

When the Shirur Mutt of Udipi and Chidambaram Sri Sabhanayagar (Sri Nataraja) Temple came to be taken over in 1951 by the then Madras Government, the takeovers were challenged before a Hon’ble Division Bench of the Madras High Court. Justice Sathyanarayana Rao and Justice Rajagopala Ayyangar came with the ‘original’ Shirur Mutt Judgment on 13.12.1951 that would forever be etched in the history of Indian Judiciary for the wisdom and foresightedness embellished in every part of the said judgment concerning Articles 25, 26 and 27 of the Constitution.

In the common judgment reported in 1952 I MLJ 557, we see that the learned judges referred to the Webster’s Dictionary for the definition of the word “Denomination” since the said word was not defined in the Constitution. The Learned Judges mentioned all the five different meanings given for the said word by Webster’s in their judgment. They then elucidated on how Hindus themselves form a Religious Denomination in a larger sense and how different theologies within the Hindu Religion can be different sub-sects of the denomination.

Shirur Mutt Case and the Hon’ble Supreme Court of India:

Two appeals were preferred by the then Commissioner of HR&CE Department of the Madras Government against the MHC judgment. Civil Appeal 39 of 1953 concerning the Chidambaram Sri Sabhanayagar Temple was heard by a Constitutional Bench of the Supreme Court, which dismissed the appeal. Civil Appeal 38 of 1953 concerning Shirur Mutt was heard by a seven-judge Constitutional Bench of the Supreme Court. The appellant restricted his arguments only to Constitutional Grounds in the Appeal.

Instead of Webster’s, the seven-judge Bench of the Hon’ble Supreme Court chose to seek the meaning of the word “denomination” using Oxford NEL Dictionary.

It is seen that the meaning expounded by Oxford Dictionary and by Webster’s Dictionary for the word ‘Denomination’ hardly have any difference. However, unlike the Madras High Court, the Hon’ble Supreme Court in the Shirur Mutt case selectively took only the 5th among the 5 meanings given by the Oxford Dictionary. There too, it left out a few words viz., “now almost always specifically” from the definition. Further, after quoting only the 5th definition, it also ignored the first part of it, which ran as follows: “A collection of individuals classed together under the same name;”.

We must remember that in 1951, the Hon’ble Division Bench of the Madras High Court was considering the denominational character of not only Mutts and Temples but the communities represented by them as well in the said common judgment.

On the other hand, in the Shirur Mutt Case, the Hon’ble Supreme Court of India, while considering Article 26, was only seized of the questions “…what is the precise meaning or connotation of the expression “religious denomination” and whether a Math could come within this expression…”. The Denominational character of a Temple or a Hindu Place of Worship were never the subject matter before the Supreme Court in the Shirur Mutt Case. After choosing a part of the definition given in the Oxford NEL Dictionary, the Bench clearly concluded that every Mutt, by being a sect or sub-sect of the Hindu religion, can be called a religious denomination since they have common faith and common spiritual organization. Hon’ble Supreme Court further held that not only the Mutt but also the spiritual fraternity it represents would come under the purview of Article 26.

Equally important is the fact that the Hon’ble Constitutional Bench in 1954 did not reverse any of the observations and findings made by the Hon’ble Division Bench of Madras High Court regarding Article 26 in the Shirur Mutt Case or the Chidambaram Temple Case. Therefore, the findings recorded by the Madras High Court concerning denominational nature of Temples in the 1951 judgment should have been followed in subsequent cases in the High Courts or in the Supreme Court.

There is a now greater urgency to correctly interpret the terms “religious denominations” and “religious character” for Hindu Institutions from Indic point of view.

How did denominational rights come to be denied for Hindu groups?

1. First, the Hon’ble Supreme Court of India or even the Madras High Court for that matter, while considering the Fundamental Rights under Article 26, for the first time after the Indian Constitution came into force, did not seek to see the connotation of the word ‘Denomination’ from the Indic point of view.

3. In the Hindu Religion, members of one Sampradaya do not exclude or deny opportunities to worship to those who primarily follow other sampradayas or no sampradayas.

4. The Hon’ble Supreme Court grossly erred by considering primarily one Dictionary and that too only one selective part of the definition given in that dictionary for the word ‘Denomination’.

5. The Hon’ble Supreme Court failed to see that other equally or more credible dictionaries belonging to the same or earlier times too have defined the word ‘Denomination’ only from the understanding and purview of Christian Institutions.

6. Hon’ble Supreme Court of India failed to note that these dictionaries clearly define Denominations only as divisions in religion and in that sense Denominations and Sects mean the same.

7. Perhaps the biggest omission made by the Hon’ble Constitutional Bench was ignoring the first part of the 5th meaning given by Oxford dictionary which described denomination as “A collection of individuals classed together under the same name;” This definition would have been more inclusive and would have ensured that most religious groups rightly come under the purview of Article 26. Another major lapse by the Learned Bench was to impose the conditions of common faith and organization that were necessary for a body to become a denomination, on the term “religious sect”. Religious sects were already described as denominations by almost all English Dictionaries, old and modern. Adding preconditions of ‘common name, faith and organization’ was not just superfluous but also incorrect since it gave a faulty definition that continues to dilute Hindu rights.

8. The fundamental religious rights ranging from Articles 25 to 30 in our Constitution were largely based on Article 44 of the Irish Constitution.The Hindi version of the Indian Constitution was ready in 1950 but unfortunately, was adopted, only in 1987 by the Indian Parliament. In the Irish Constitution, if there is some ambiguity regarding the meaning of a certain word, the actual meaning found in the Irish language (national language) should be followed by Courts. Article 394-A (3) of the Indian Constitution is very relevant in this regard.While seeking to know the precise connotation of the term “religious denomination” and from an Indic purview, Courts should well consider the Hindi version of the Constitution where the equivalent term given for the word denomination is “Sampradaya”. Monier Williams English to Sanskrit Dictionary gives ‘Sampradhaya’ as one of the meanings of the word Sect. Sampradaya is also defined as any ‘peculiar or sectarian system of religious teaching’. It is also defined as ‘tradition’, ‘established doctrine transmitted from one teacher to another’, ‘traditional belief or usage’.

9. Article 26 of the Indian Constitution in Hindi is given below: 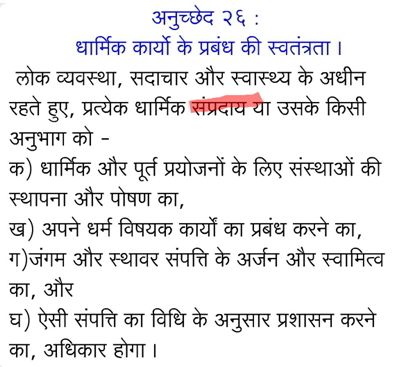 10. Judgments that came after the 1954 Shirur Mutt Judgement of the Hon’ble Supreme Court followed the incomplete and the flawed definition of the word ‘Denomination’ and started applying it in all cases where Hindu Institutions claimed protection under Article 26 from external interferences and control. Further, Supreme Court Benches started imposing more conditions to Hindu Institutions and groups to be recognized as religious denominations. In certain cases, communities and sects were asked to show that they had established the Institution that was maintained by them to be recognized as denominations. These additional conditions were never envisaged by the framers of our Constitution.

11. Today, things have come to a stage where their Lordships of the Hon’ble Supreme Court describe a unique Sampradhaya like the Sri Sabarimala Ayyappa tradition as a non-denomination and that its core religious practice is no different than that of all Hindus.

12. Justice O. Chinnappa Reddy warns in his dissenting judgment in the S.P. Mittal Case (1983 AIR 01) that “….So soon as a word or expression occurs in the statute is judicially defined, the tendency is to try to interpret the language employed by the judges in the judicial definition as if it has been transformed into a statutory definition. That is wrong. Always, words and expressions to be interpreted are those employed in the statute and not those used by judges for a felicitous explanation. Judicial definition, we repeat is explanatory and not definitive….”

13. There is much sense in Justice O. Chinnappa Reddy’s observation in the above judgment that found in most Judges’ strained dissertations on Article 26 and in the meaning of the word “Denomination” expounded in judgments dating from 1954.

14. There is a now greater urgency to correctly interpret the terms “religious denominations” and “religious character” for Hindu Institutions from Indic point of view. Wrong judicial interpretations of the word “denomination” since 1954 have wreaked havoc on the Fundamental Religious and Administrative Rights of Hindus. Today if Courts were to seek the meaning of the word ‘Denomination’ (religious) from any dictionary of merit including the Oxford Dictionary they would find that the word means only a ‘sect’ and primarily an autonomous branch of Christian Church. ‘Common name, faith, and organizations’ are long forgotten by the learned except by our Learned Judges.

15. It is an irrefutable fact that only Hindu Institutions and Charities suffered due to this continuing injustice and refusal to cloak Hindu Sampradayas with the protection that Article 26 offers to sects and institutions of other religions.

16.  If this is this not discrimination against the majority community, what else could this be?  Constitutional morality? 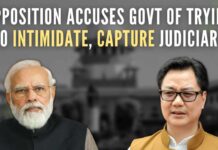 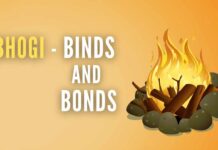