I really don’t know what being a Hindu is, if we cannot save our own source of life.

There are many controversial cow slaughterhouses in our country. It has become a hub now. Many may get offended but it is the need of the hour to speak out the fact, “beheron ko sunane ke liye dhamake ki zaroorat hoti hein”. We all are law abiding citizens of India. Neither we succeeded in making appropriate laws nor in implementing them. And I don’t see even if we have regards for own Constitution. We all know what Article 48 of Indian Constitution says “The State shall endeavour to organise agriculture and animal husbandry on modern and scientific lines and shall, in particular, take steps for preserving and improving the breeds, and prohibiting the slaughter of cows and calves and other milch and draught cattle”

Com smuggling is a huge racket involving the high and mighty from across caste and religious groups.

Millions of Hindus revere and worship cows. We don’t have to say it again and again that It is a religion that raises the status of the cow to the level of goddesses. It is considered sacred as it provides us with life-sustaining milk. It is a symbol of divinity bounty of the earth.  The Vedic stature of a cow was “Aghanya” i.e. it cannot be killed. Killing Cows was amounting to killing human beings. It is a blessing to Indian rural community. In India where 70% live in the villages, for them, cow is not just an “animal”. Unfortunately, the same land of cow worshippers has turned into a land of cow slaughterhouse. It is said after Brazil, India is the second highest in owning cow slaughterhouse and the world’s top beef exporter (Source: Time, March 23, 2015). According to data from the country’s Agricultural and processed food Product’s Export Development Authority,  beef has also overtaken basmati rice as India’s largest agricultural food exports in terms of value (Source: Economic Times).

Since Independence, India witnessed many massive movements for prohibiting cow slaughter like the one in 1966 led by Swami Karpatri Ji Maharaj and Acharya Vinobha Bhave

Last year a video of struggling helpless cattle, their legs tightly tied with logs, being smuggled across a river in Assam to Bangladesh went viral. In Bihar, cow smugglers chopped off the fingers of a gateman who tried to stop them. Uttar Pradesh former Director General of Police Vikram Singh said “Com smuggling is a huge racket involving the high and mighty from across caste and religious groups. The raid by police in Bareilly, Meerut, Agra, Varanasi, and Gorakhpur has fuelled the grey market”. 1.78 lakh cattle were seized near the Indo-Bangladesh border last year. (Source: Indian Express, 22 July 2017)

According to the Border Security Force (BSF) officials cow smugglers use all kinds of methods to trick the border patrols – one was to tie the cattle to banana trunk rafts, cover them with a blanket of weed and make them swim across the Brahmaputra River (Assam); the most common being to herd them across the border (Bangladesh). Dhubri in Lower Assam, which shares a border with both West Bengal and Bangladesh, figured high on the cattle smuggling, estimated to be around 20,000 cr annually at its peak, say officials. (Source: Hindustan Times, July 16, 2018)

Maulana Hasrat Mohani, a Congress leader once mentioned that to his recollection beef was never eaten in their home.

Since Independence, India witnessed many massive movements for prohibiting cow slaughter like the one in 1966 led by Swami Karpatri Ji Maharaj and Acharya Vinobha Bhave. British rule witnessed a very strong “Gau-Raksha movement” in the leadership of Swami Dayanand Saraswati. And how one can forget the incident of 7th November 1966 on Gopastami, Hindu Massacre in Delhi, where innocent people were protesting against rising cow slaughter in India. While a report says 375, a participant says 5000 Hindus were brutally killed by bullets spray by Delhi Police and buried in unknown places (Source: www.hinduhumanrights.info ). Many intellectuals give this argument that this is a food of minority of our country.  It is to note that during Islamic rule slaughter of cows were prohibited with strict penal provisions. The tradition of beef eating is established in the shadow of the British Raj and acquired its momentum after the British left. Well, as far as the history concerned you will see that beef was never a staple diet in the places of origin of the Delhi Sultans and the Moghuls. They ate mutton, camel meat, chicken and others etc. It was during the British rule, that cow slaughter took place on a large scale to provide beef to the British troops and civilians.

“There were a very large number of cows and their progeny were daily slaughtered by the British for their army. So, from about 1750 there was nationwide anti-cow killing movement against the British between 1880-1894. and many prominent Muslims, as well as the Parsis and Sikhs, actively participated in the movement.

“Maulana Hasrat Mohani, a Congress leader once mentioned that to his recollection beef was never eaten in their home. Consumption or mention of ‘beef’ was taboo because it might ‘hurt’ people who frequented their homes”.

There is also an argument that in North-east India beef is very popular and consumed on a large scale. And as if, all might die out of starvation if beef is not eaten there and there is no other food available here in this part. Well, let me tell you that being an agricultural based nation in most states of India, rice is the staple food. In Christian dominated states like Meghalaya, Mizoram and Nagaland people consume it and but largely Buffaloes are consumed and used in traditional customs. Let me add that I hail from Assam, north-eastern part of India and my entire family, relatives, and cousins none have consumed beef socially or at home. Because it was never a part of the customs or traditions to eat beef. In Rangali Bihu which is a main festival of Assam celebrated for one week as a gesture to welcome Indian New Year. And on the first day, particularly dedicated for cows and farm animals (as it is a source of their livelihood). So, consuming beef and generalizing it is not justifiable. We need to understand that earlier, because of the climatic and geographical condition in north-east India food varieties were less in number, people used to have more non-vegetarian food. But, now due to globalization and advancement of technology, it is no longer a scarcity. So, eating beef is not an integral part of North-eastern people too.

From the last two years, passionate liberal intelligentsia and people with vested interest are running this campaign vehemently to create a rhetoric that our country is going into the hands of religious fundamentalist and mob rule

Every Sanatanis of India believes Cow as a sacred symbol of life because of its close association with agriculture. So, every genuine Hindu feels that it is their responsibility to protect their life till their last breath. And I don’t have to give a long explanation on the effect of Cow on the economy and agriculture. Millions of Hindus have an emotion with it. And try to protect it by taking lots of risks whom we called as ‘Gau-Rakshak’. Every living being, attacked or defence themselves when their loved ones or families life is at stake.

However, from the last two years, passionate liberal intelligentsia and people with vested interest are running this campaign vehemently to create a rhetoric that our country is going into the hands of religious fundamentalist and mob rule is taking over the government. “Cows in India are safer than Muslims” or “Hindustan is becoming Lynchistan” is the level to which this discourse has descended. Amidst all these, the Honourable Supreme Court while disposing of a bunch of Public Interest Litigations (PIL) on 17th July 2018, finally ordered the State Governments to appoint a nodal officer in each district to stop mob violence and has recommended the central government to make a specific law against it.

According to the 19th livestock census, the number of milch animals (in milk & dry), cows and buffaloes, is 118.59 million. Mirzapur Moti Quaraishi Case, the Supreme Court in Para 139 of the judgment held, “Majority of the population is engaged in farming within which a substantial proportion belongs to small and marginal farmer’s category. Protection of cow progeny will help them in carrying out their several agriculture operations and related activities smoothly and conveniently. Organic manure would help in controlling pests and acidification of land apart from resuscitating and stimulating the environment as a whole”. For an agrarian country like India cattle are a source of livelihood.

For the animals on which atrocities are being committed illegally, the right of defence also lies with civil society members as the cattle cannot come as in its private defense. Bentham, in his principle of the Penal Code, says: “the right of defence is absolutely necessary. The vigilance of Magistrates can never make up for the vigilance of each individual on his behalf”. In this entire episode, the sickular activists have portrayed the word “vigilantism” in a bad light that it is being perceived as a crime. However, vigilant society is the need of the hour our society today needs more diligent and vigilant citizens. When innocent people resist cattle smugglers, they are threatened with the use of weapons which compels them to invoke their Right to Private Defence of a person as well as of property.

I wonder despite our ancient rich heritage, history and being the ancient civilisation in the world, we Hindus are still suffering and shrinking, Why?

I wonder despite our ancient rich heritage, history and being the ancient civilisation in the world, we Hindus are still suffering and shrinking, Why? Well, those Indians who called themselves as “Proud Hindus” or worship Lord Krishna or Lord Shiva or religious for that matter, neither able to protect Gau-Mata nor supporting those people who are fighting selflessly for Cow Protection. We have money to build exotic temples or to celebrate Janmashtami or Shivaratri in every nook corner of India but neither have we had time and devotion, determination, energy or money to spend on saving and fighting for those innocent lives. So, if anyone believes in Law of Karma must know that as we sow so shall we reap. We are just paying back for our deeds. Because in the last 71 years we failed to save our ancient roots and heritage. After 71 years of Independence, India became one of the largest beef exporters in the world, is this our achievement? Ask yourselves. I really don’t know what being a Hindu is, if we cannot save our own source of life. That’s it! 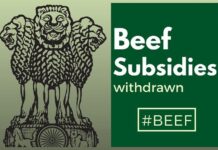 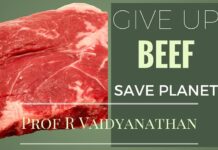 Give up Beef and save the Planet Ram Mandir construction in Ayodhya to begin on June 10

The Indian Caesar and the City