[dropcap color=”#008040″ boxed=”yes” boxed_radius=”8px” class=”” id=””]O[/dropcap]nce labelled as one of the most talented all-rounders India has produced, Irfan Pathan was kept away from international cricket by injuries and poor form for the past three years. But Irfan believes that the dream for a national team call-up is still very much alive for him, especially after a memorable comeback recently in the first class season which saw him claim 12 wickets and score over 90 runs in two matches.
The 31-year-old finished with figures of 6-47 and scored 73 runs including a half-century for Baroda against Gujarat which was followed by 6-80 along with 18 runs against Punjab in the recent Ranji Trophy matches.
Irfan made it clear that he has returned to full fitness and is concentrating on the task at hand, that is, to pick wickets and get runs under his belt which will eventually catch the eyes of the national selectors.
“Every player who plays first class cricket dreams to play for India; that’s why I am in the Ranji Trophy. I still have my dream very much alive to play for India. I just want to keep my mouth shut and keep playing. My aim is to keep performing, keep improving, and keep doing the right thing,” Irfan told IANS in an interview.
“If I perform, I am sure the people (selectors) who are there will notice. My performance will speak for me,” he said.
[dropcap color=”#008040″ boxed=”yes” boxed_radius=”8px” class=”” id=””]A[/dropcap]fter making his debut in 2003 against Australia in Adelaide, Irfan has claimed 100 wickets and scored 1,105 runs in 29 Test matches, besides taking 173 wickets and scoring 1,544 runs in 120 One-Day Internationals (ODIs) so far.
The all-rounder, who played his last ODI in August 2012, said his preparations for the first class season helped him grab a six-wicket haul against Gujarat on a slow and flat pitch.
“I have got back to full fitness. Before the season I was preparing well and the best part was that I was fit from the start. All I needed was to perform really well, which I did against Gujarat. The pitch was slow and flat,, but I got six wickets on that wicket and that gave me a lot of confidence,” he said.
“More because when you get wickets in a slow track by bowling someone out or a leg before wicket, that gives you a lot of confidence. I carried the confidence also against Punjab in my second match, took wickets and we won the match,” the left-arm seamer said.
color=”#008040″ boxed=”yes” boxed_radius=”8px” class=”” id=””]T[/dropcap]he Baroda-born cricketer believes that the experience which he has gathered over the years in international cricket is paying off quite well at a time when he is aiming to get back his national spot.
“Making a comeback is never easy for anyone. I know, as I have done it before. I want to use my experience that I have for so many years. Experience is something I have with me now and it is paying off really well. I am getting wickets because of my experience. Getting used to four-day format will help me get into any formats of international cricket,” he said.
When asked if age would be a barrier for him to return to the India side, the 31-year-old said, “Right now the World No.1 Test bowler Dale Steyn is 32. So I don’t think I will have a problem. Also India is currently looking for an experienced seaming all-rounder. I can even mentor the young seamers.”
[dropcap color=”#008040″ boxed=”yes” boxed_radius=”8px” class=”” id=””]A[/dropcap]fter having played under the captaincy of Sourav Ganguly, Rahul Dravid and Mahendra Singh Dhoni, Irfan refused to pick the best one, terming it would be unfair to them, but hailed the trio for their different style of leading a side.
“All the three captains, Ganguly, Dravid and Dhoni, I have played under were wonderful. All three had a different style of leading a side. It will be hard and unfair to pick one. Now Virat Kohli is displaying a quite exciting leadership as well,” Irfan concluded. 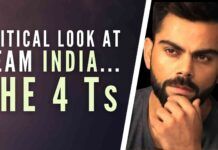 Why India should have different players for different formats

Subramanian Swamy files petition to SC against BCCI move to give...