According to IFC, the $1 billion equivalent taka bond programme in Bangladesh aims to strengthen capital markets and increase foreign investment in that country. “Under the program, IFC will issue the first taka-linked bonds in the offshore market and bring the proceeds back to finance investment in Bangladesh. The bonds will be listed on the London Stock Exchange,” IFC said.

[dropcap color=”#008040″ boxed=”yes” boxed_radius=”8px” class=”” id=””]I[/dropcap]FC’s executive vice president and CEO Jin-Yong Cai was quoted as saying “Domestic capital markets are critical to providing long-term, local-currency finance for the private sector-which plays an essential role in job creation in emerging markets,” in a statement. According to the statement, IFC has, over the years, launched various bond programmes with the aim to strengthen local capital markets and to finance projects in emerging markets.

Note:
1. The conversion rate used in this article is 1 US Dollar = 65.05 Rupees.
2. Some of the content is used from IANS.
3. Text in Bold points to additional data on the topic. Despite substantial devaluation in other currencies, Indian rupee maintained its value: RBI Governor 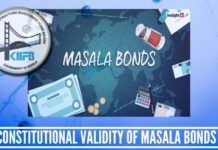