The Indian security establishment is closely monitoring the movement of a Chinese spy ship that has entered the Indian Ocean region to track the likely launch of an Indian missile next week. Chinese spy ship is located on the Odisha coast. The spy ship Yuan Wang VI is equipped with highly sophisticated surveillance systems and can monitor the activities in many military installations and defence establishments besides the launch process of missiles. India usually conducts missile tests from A P J Abdul Kalam Island, off the Odisha coast.

This is the second incident in three months, where a Chinese spy ship came close to Indian areas. While the first ship Yuan Wang V docked at the Hambantota port of Sri Lanka leading to a diplomatic protest by India. The ship remained at the port for more than five days and then sailed off.[1]

The latest deployment of the Yuan Wang VI ship was tracked by satellites and it is now sailing toward Indonesia. These ships can monitor the trajectory, speed, and accuracy of the missile said Indian Defence Officials said.

Given the strategic importance of the Indian Ocean region, China in the last few years has increased its maritime presence there. At any given point of time, three to four Chinese warships are sailing in the region. China ramped up its naval capabilities in this region in 2008 when its ships joined the international effort to fight sea piracy.

India has huge stakes in the Indian Ocean region as sea lanes passing through it carry more than 70 percent of export and import cargo. Not willing to take chances in this zone, India has enhanced its efforts to forge closer ties with all the countries located on the rim of the ocean. India also provides assistance to some countries in the form of training their military crew in flying aircraft and helicopters. India has also gifted some helicopters and Maritime reconnaissance aircraft to some of these littoral states. 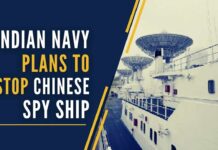