The Indian Army has increased deployment gradually in the regions of Arunachal Pradesh. It has revamped air firepower at its aviation wings. The force has recently come up with an aviation brigade in the region after getting more unmanned aircraft ‘Heron I‘, chopper ‘ALH Dhruv‘ and weaponized attack helicopters ‘Rudra‘. Earlier, the force aviation wing largely had Cheetah Helicopters.

From Sikkim to Arunachal Pradesh, India shares a total of 1,346-km-long LAC with China. India and China have been engaged in a border standoff for the past 18 months.

The Army has also raised its first-ever dedicated squadron of ‘Rudra’ armed helicopters. Rudra is the first Army Aviation aircraft to add ‘teeth’ to the fleet of Army Aviation with its Mistral air-to-air missiles, 70 mm rockets, 20 mm guns, and ATGMs. The ALH (WSI) is a force multiplier for the field force commander with its potent weapons on board. This helicopter will be able to storm the enemy forces and hunt them down when required.

Lt Col Dadhwal said, “We have in the rotary platforms today in the form of Cheetah, Advanced Light Helicopters, ALH-Weaponised System Integrated and Light Combat Helicopters. These Rotary Wing platforms provide us and our leaders and commanders a plethora of capabilities so that we can achieve success in all kinds of operations.”

The force has raised the squadron of indigenously designed and developed Advanced Light Helicopters (ALH-Dhruv). It is a twin-engine, multi-role, multi-mission new generation helicopter in the 5.5-ton weight class and is being used for quick mobilization of troops.

“ALH (WSI) pilot will be like an archer who will strike and kill or injure the enemy from a distance. He will be like a fierce God bringing death and destruction to the enemy,” said a senior Indian Army officer.

As the Chinese People’s Liberation Army (PLA) aggression at the Line of Actual Control (LAC), the force has increased the frequency of surveillance at the border area to keep a tab on their activities.

“The aircraft since its inception has been the backbone of surveillance. It can climb up to 30,000 ft and continue to give feed to commanders on the ground. So that we can manoeuvre forces on the ground. It has an endurance of 24-30 hours at a stretch,” said Major Karthik Garg.

So far, 13 rounds of top commanders’ level meetings have taken place and the last round of talks, which was held on October 10, culminated inconclusively.

The Indian Army has gradually enhanced the deployment of air assets, including unmanned aircraft, near the borders with China in the Arunachal Pradesh region. 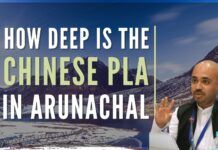 Chinese should be uprooted from Ladakh – Dr Swamy