The security forces have virtually broken the backbone of Hizbul Mujahideen terrorists in South Kashmir.

Five soldiers were killed in action in the Handwara encounter while three CRPF personnel had attained martyrdom on Monday in the Wangam area of Handwara in a back to back terrorist attack. The security forces blasted his hideout after a fierce gunfight in Beighpora village on Wednesday. His dead body was recovered from the debris of the house. With his killing, the security forces have virtually broken the backbone of Hizbul Mujahideen terrorists in South Kashmir.

Riyaz Naikoo was trapped in his fortified hideout since late Tuesday evening when cordon and search operations were launched by the security forces after receiving a tip-off about his presence in the area along with his close aide. The security forces faced tough resistance on ground zero as large crowds stepped out of their houses to disrupt their smooth movement. Sporadic incidents of stone-pelting were also reported from different areas of Pulwama near his native village.

Meanwhile, two other local terrorists were killed in a separate encounter with the joint teams of security forces in the Sharshali Khrew area of Awantipora. Inspector-General of Police, Kashmir range, Vijay Kumar informed, “One of the slain terrorists was identified as Hizbul Mujahideen’s chief operational commander Riyaz Naikoo.”

A police spokesman in Srinagar said, “In Sharshali encounter two terrorists of Lashkar-e-Toiba (LeT) were killed. Police spokesman said, “In the second operation in Beighpora village of Awantipora, a top terrorist commander was trapped along with his associate. The operation was launched last evening and contact was established with hiding terrorists in the morning today. In this encounter, two terrorists were killed. One of the terrorists has been identified as Riyaz Naikoo. He was the Chief operational Commander of (HM) outfit in Kashmir.”

Naiko was A++ category terrorist

According to Jammu and Kashmir police, Riyaz Naikoo was categorized as A++ terrorist and carried a bounty of 12 lakhs on his head. In 2019, Naikoo had also figured in the list of most-wanted terrorists prepared by the Ministry of Home Affairs.

Riyaz Naikoo was tech-savvy and was involved in a series of incidents of attacks on security forces, truck drivers, brick kiln workers, and civilians.

According to police records, Riyaz Naikoo took over the command of Hizbul Mujahideen in Kashmir valley after Zakir Musa, the successor to the group’s commander Burhan Wani, left to form his own terror group Ansar Ghazwat-ul-Hind, which is affiliated with Al-Qaeda in 2017. Musa was neutralized by the security forces in May 2019.

Before joining the ranks of the terror outfit, Naikoo was working as a Mathematics teacher in a local school. Naikoo was tech-savvy and was involved in a series of incidents of attacks on security forces, truck drivers, brick kiln workers, and civilians.

Police spokesman said, “Naikoo had been continuously making audio and video clips and putting up on social media to motivate youth to join militancy and went on recruiting new boys.” He was responsible for a large number of innocent youths getting into militant ranks and indulging in serious violence against local population and security forces, added police spokesman.

“He was a mastermind behind the revival of HM outfit in Jammu and Kashmir. He also released videos/audios on a number of occasions carrying Pro-Pakistan and separatist propaganda,” said in the police statement.

“He looted orchard owners and farmers to collect funds for his outfit. He also has been collecting booty from illicit cultivation of opium and ‘Bhang‘ in South Kashmir. His outfit also figured in narco trade case in Jammu where a huge sum of sale proceeds was transferred to one of his contacts,” the police statement added. 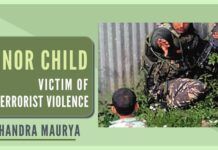 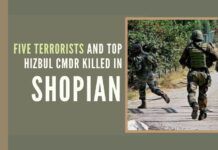 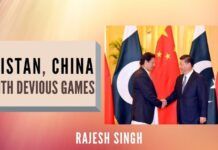