The US hit by Coronavirus pandemic the most. The US State of Missouri has sued China on COVID-19 mishandling.

US President Donald Trump might have a credibility crisis, with people even within his party and band of loyalists refusing to believe in everything that he says. That skepticism apart, it would be unwise to dismiss across the board his accusations against China over the spread of the Coronavirus pandemic which has, incidentally, hit the US the hardest. We may consider as outlandish the allegation that China deliberately unleashed the virus from one of its laboratories, but it is very possible that the virus escaped from the laboratory as a result of grave negligence. And that the Chinese authorities, having realized the blunder, worked overtime to camouflage it through coercive means domestically and diplomatic measures internationally.

The US State of Missouri has sued China on COVID-19 mishandling. The lawsuit alleges that Beijing suppressed information, arrested whistleblowers, and initially denied the contagious nature of the disease. All of these led to “irreparable damage” to countries globally. The lawsuit mentions the Chinese government, the ruling Chinese Communist Party, and some Chinese officials and institutions as the accused. An American lawyer has filed a $20 trillion lawsuit against China for the ‘creation and release’ of the Coronavirus, which has been used by Beijing as a biological weapon.

If China has nothing to hide, why does it not allow a team of independent, global experts — including that from the friendly WHO — to visit Wuhan Province and study the issue?

And it’s not just the US which has demanded compensation from China. Even countries that have been at odds with the US in recent months have gone ahead to claim damages for the spread of the pandemic. For instance, Germany presented China with a 130 billion pound bill, the breakup of which includes losses incurred in tourism, to the German film industry, to the German airline Lufthansa, and to the country’s small businesses. Both France and the UK have expressed strong disapproval over China’s handling of the pandemic information in the early stages. A UK-based Conservative think-tank has explored 10 points on which China can be sued for “trillions of dollars for its initial coverup of the Coronavirus pandemic…”

President Trump’s demand — and a similar one by other countries, both in the West and elsewhere — for a fair, open and independent investigation inside China into the origins and spread of the virus, is valid. Indeed, it’s necessary, because Beijing cannot be believed. So far, China’s response has been along expected lines. It has presented itself as a victim, pointing out that thousands of its citizens in Wuhan, where the virus originated, had lost their lives. Besides, the Chinese economy had been badly hit by the tragedy, and its impact would be felt for years to come. China has also sought to present a ‘humane’ face in the midst of the tragedy (in a bid to divert global attention from its wrongdoing) by showing alacrity in supplying medical equipment to countries). But this has boomeranged as the medical kits came with a heavy price tag and, worse, they were found defective — some countries returned the kits and cancelled the orders they had placed with China. India was one of the victims of this so-called humane outreach. It also promised an additional $30 million to the World Health Organisation (WHO) after US President Trump announced a cut in his country’s funding to the UN agency.

The questions China needs to answer

If China has nothing to hide, why does it not allow a team of independent, global experts — including that from the friendly WHO — to visit Wuhan Province and study the issue? Why did it not discontinue international flights to and from Wuhan when it stopped all flights from Wuhan to the rest of China and vice versa when the disease first broke out? Why has it camped down on new research by Chinese scientists after reports emerged from its experts which highlighted the dangerous work being conducted on bat virus? Why has it not shared any live virus samples with the world? The allegation is that it destroyed the samples. If that is indeed true, then why did it do so? Why has China not behaved as a responsible nation in the context of this virus pandemic?

Not only has Beijing been less than transparent in its behaviour, but it has also been vicious in its attack on nations that have demanded accountability from it. Take the case of Australia, which has a robust trade relationship with China. It called for WHO member-nations to demand an independent inquiry into the spread of the pandemic from China. In return, China openly threatened it with economic retaliation. The Chinese Ambassador to Australia said his country could consider boycotting Australian products if Canberra continued with its ‘anti-China’ posture. This is typical of the Chinese arm-twisting tactic which has been refined over decades and integrated into its state policy.

New Delhi, in its heart of hearts, realizes the blunders that China has committed, which led to the spread of the disease, taking a heavy toll on India as well.

Beijing’s shocking but not surprisingly irresponsible behaviour offers an opportunity to the global community to reset its economic relations with the Asia giant. It would be stupid to believe that China can be isolated globally in trade matters. But the West can show the way to downscaling those ties. Meanwhile, global efforts must be sustained to seek a probe into the spread of the Coronavirus pandemic. And the best place to begin the inquiry is China.

Where does India stand in this controversy? As always, it is trying to find some middle ground. It does not want to antagonize Beijing, but it also does not want to be seen as backing an opaque regime. New Delhi, in its heart of hearts, realizes the blunders that China has committed, which led to the spread of the disease, taking a heavy toll on India as well. But it will not openly call a spade a spade. But at least it can add its voice, and loudly at that, to the demand for a global investigation without prejudging China. 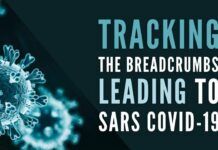