The basic theme of this book is innovation, which is described as “the main driver of transformation in the twenty-first century”

On the 25th of this month, our Prime Minister and some of his colleagues gave us a heap of statistics on what their NDA government had achieved in their four years of office. And now, a few days later, we have a 175-page government book giving us a novel side of those achievements. It’s a totally new approach, concentrating exclusively on the 17 important innovations in the system of governance brought about by the NDA team captained by a workaholic and daring Narendra Modi. It’s perhaps never been done before by any government anywhere.

What I found especially interesting and informative case of the Dalits of our land. The Venture Capital for Scheduled Caste people, started by the Modi government in 2015, initiating the Dalits to move away from being job seekers to job givers

The hardbound book, named “The Innovative Republic” fully justifies its title. Each of its 17 Chapters is very readable sometimes stunning in revelations. And at the top is an article penned by the Prime Minister on “The Path of Good Governance“. What is also remarkable about this book is that there is no page called Errata! Instead, we have five pages of Index! What this fanatic with a fetish for spelling of words could not detect a single so-called “typo” error; nor did one see a fault in the grammar.

This rare book has been conceived by Vinay Sahasrabuddhe (having a PhD in Democracy from a US University) and Dhiraj Nayyar, a senior and much travelled across several positions with newspaper/news portal. Another rarity is that both of them are under the aegis of the Government of India. The former is a nominated Rajya Sabha member national Vice-President of the BJP, after over a decade as the Director-General of the research and training institution named after late BJP MP Rambhau Mhalgi and the national BJP Vice-President. Nayyar is the Officer on Special Duty, and Head, Economics, Finance and Commerce Cell, NITI Ayog, Government of India; prior to that, he was trained in Economics from Delhi, Oxford and Cambridge.

The basic theme of this duo’s book is innovation, which is described as “the main driver of transformation in the twenty-first century”. It says that “Governments, though not commonly associated with the creativity, nimbleness and risk-taking ability, require to innovate.”. And they proceed to describe, interestingly, how each of the 17 innovations created by Narendra Modi government, has impacted the eco-system a changing ambience.

Starting from how the Prime Minister, held, since March 2015, frequent intense discussions with a whole lot of the national and state governments high-level officials. That is how he reached PRAGAT I or Pro-Active Governance and Timely Implementation, the duo go on to 16 other innovations, one after another and bring out facts not known to the nation as a whole.

What I found especially interesting and informative case of the Dalits of our land. The Venture Capital for Scheduled Caste people, started by the Modi government in 2015, initiating the Dalits to move away from being job seekers to job givers. Today, the adviser of the Dalit Indian Chamber of Commerce and Industry told a TV Channel that “The change in society is visible with the rising participation of Dalits in many economics and the youth is the driving force.” In fact, a Dalit entrepreneur is known to have floated an e-commerce venture dubbed as “Dalit Foods”.

Unless you are Rahul worshipper, there is a lot to learn about governance from “The Innovation Republic.” And I was not surprised that its blurb carries praise from Raghuram Mashelkar, National Research Professor, Chairman National Innovation Founder. Incidentally, Mashelkar of CSIR fame, the one who, with just one e-mail sent me, some months ago, a long paper on agricultural innovation. The authors of this book must get involved in solving the much-touted “agricultural crisis” in our country.

Another rare characteristic of the Government-published book is the style of its writing. All its 178 pages carry the stamp of high professionalism and the lucidity of creative minds. The following is an example:

“The ‘governnovations’(sic) have helped the cause of transparency and accountability.” That appears on the inside cover of the book.

And the following perspective of governance is from the book’s Preface:

“Innovations know no bounds! In fact, the history of human civilization is all about innovations. It has been rightly said that darkness is not just the absence of light; it is about inertia to find ways and means of darkness. Similarly, a problem is not about the absence of solutions. It is about a short supply of ideas.  And ideation (sic) being the mother of innovations, it is required to be actively celebrated through the creation of an ecosystem for the same.”

Yes, as Meghnad Desai, Professor Emeritus, London School of Economics, is right when his blurb on the book says that the two authors “have given us a gem of a book”.

If the book is to get a nation-wide traction, it would be essential if it is translated in all the languages listed in our Constitution and sold for one rupee to the public at large. Further, the gist of the book should be distributed, free, to all the students of all our schools and colleges— in, once again, all our country’s languages.

And, since he may not be spending anything out of his wealth on intellectual issues, a copy should be gifted to our Rahul — in the Italian lingo. Then, perhaps, he may understand the need of wisdom and perspective in political governance set out in the above-cited portion of the book’s Preface. 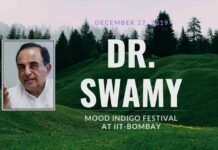 Dr. Swamy at IIT Mumbai on Entrepreneurship and various intelligences on Dec 27 2019 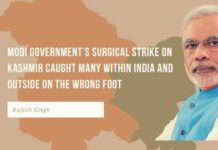 Sattology- Modiji, Timing is all that matters