US wins appeal in UK Court to have Julian Assange extradition

WikiLeaks Founder Julian Assange Extradition can be from the UK to the US, the High Court in London ruled on Friday, by quashing the lower court decision that he could not be sent to America due to concerns over his mental health. 50-year-old Assange is wanted in the US over the publication of thousands of classified military and diplomatic documents in 2010 and 2011. Assange published the US cable communications from different countries in his portal WikiLeaks.

As per the London High Court’s ruling, the US authorities won their appeal against a January UK court ruling that the Australian national could not be extradited due to concerns over his mental health after the court was felt reassured by the US promises to reduce the risk of suicide. Lord Chief Justice Lord Burnett and Lord Justice Holroyde handed down the judgment following a hearing in October. Assange’s fiancee, Stella Moris, said they intended to appeal against the “grave miscarriage of justice”.

‘Today is international human rights day. How cynical to have this decision on this day.’

Stella Moris has urged people to ‘fight for’ her partner Julian Assange after describing the High Court’s ruling as a ‘grave miscarriage of justice.’

In January, District Judge Vanessa Barrister, presiding over the case at the Old Bailey court in London, ruled that Assange was likely to take his own life if extradited to the US – where he is wanted on 17 espionage charges and one charge of computer misuse over WikiLeaks publication of leaked military and diplomatic documents a decade ago. The charges carry a maximum sentence of 175 years in prison.

US found that the cable messages from various US embassies across the world were leaked to Julian Assange by a young military officer Bradley Manning. He later converted as female and chose the name Chelas Manning and obtained a Presidential Pardon from Obama in 2016.[1]

London High Court judges found that Judge Barrister had based her decision on the risk of Assange being held in highly restrictive prison conditions if extradited. However, the US authorities later gave assurances that he would not face those strictest measures either pre-trial or post-conviction unless he committed an act in the future that required them. “That risk is in our judgment excluded by the assurances which are offered. It follows that we are satisfied that, if the assurances had been before the judge, she would have answered the relevant question differently,” said the order of Lord Burnett.

“That conclusion is sufficient to determine this appeal in the USA’s favour. “Lawyers acting for the US also argued Assange’s health is well enough for extradition. Assange has been held in Belmarsh Prison since 2019 after he was carried out of the Ecuadorian embassy by police before being arrested for breaching his bail conditions. He had been living in the embassy since 2012 to avoid extradition to Sweden to face sex offence allegations, which were eventually dropped. 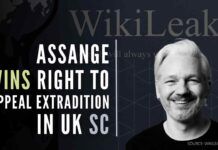 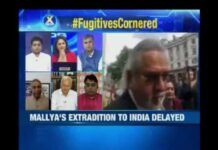