The Kanpur Police have arrested another key conspirator, Haji Wasi, who is accused of funding in the Kanpur violence case. As per police, Haji Wasi was the main financer of prime accused Zafar Hayat Hashmi. Wasi has been on the run since the violence occurred.

Earlier, Wasi’s son Rahman was arrested by the Kanpur Police and sent to jail. The SIT had earlier obtained a Non-Bailable Warrant (NBW) from the court against him and 18 other accused in the case. The search was on after the accused builder Haji Vasi went absconding after the violence that erupted in the city.

On June 12, Kanpur Development Authority (KDA) had sealed the property of builder Haji Wasi who as per the communique issued by the Commissionerate police was found to be involved in the violence at the Parade and adjoining areas in the city after Friday prayers on June 3.

The KDA team had sealed a building owned by Haji Wasi in front of ESI hospital in the Wajidpur area of Chakeri. Earlier also four properties of builder Haji were sealed by KDA on separate dates.

Joint CP Anand Prakash Tiwari had said, “NBW has been obtained from the court against him. Apart from this, warrants have also been obtained against more than a dozen people associated with Mukhtar Baba and builder Wasi. Now, if the builder Wasi and others are not arrested after this, then the police will implement the attachment process against them,” said Tiwari and added, “All the police teams including the SIT have been deployed for this.” 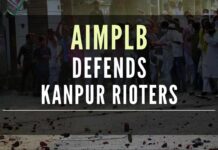 Under whose orders will the bureaucrats of Delhi run? SC sent...