Outrage over the poster of smoking Hindu goddess

India’s High Commission on Monday urged Canadian authorities to take action against the disrespectful depiction of Goddess Kaali by controversial documentary maker Leena Manimekalai. For the past two days, widespread protests were raised during the documentary’s screening at Aga Khan Museum, Toronto.

“We have received complaints from leaders of the Hindu community in Canada about the disrespectful depiction of Hindu Gods on the poster of a film showcased as part of the ‘Under the Tent’ project at the Aga Khan Museum, Toronto.

“Our Consulate General in Toronto has conveyed these concerns to the organizers of the event. We also informed that several Hindu groups have approached authorities in Canada to take action. We urge the Canadian authorities and event organizers to withdraw all such provocative material,” said the High Commission in a statement.

Protests were raised by many people after the poster of the documentary was published on social media by the director showed Goddess Kaali smoking and holding an LGBTQ flag. The poster has led to a social media storm with the hashtag ‘Arrest Leena Manimekalai‘, allegations that the filmmaker is hurting religious sentiments, and a member of a group going by the name ‘Gau Mahasabha‘ saying he has filed a complaint with Delhi Police.

In response to the attacks, the Toronto-based director hit back to say she was willing to pay with her life. “I have nothing to lose. Till the time I live, I wish to live with a voice that speaks what I believe without fear. If the price for that is my life, it can be given,” Manimekalai wrote in a Twitter post in Tamil in response to an article on the controversy.

The Madurai-born filmmaker shared the poster of “Kaali” on the microblogging site on Saturday and said the film was part of the ‘Rhythms of Canada‘ segment at the Aga Khan Museum in Toronto. Manimekalai also urged people to watch the film to understand the context behind the poster. Several Twitter users slammed Manimekalai. 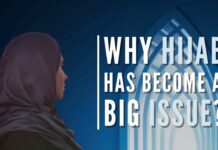 Why hijab has become a big issue in India? 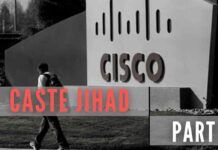 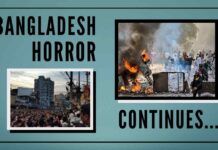