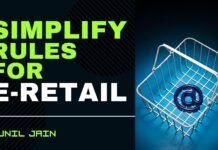 Amazon vs Jio Mart: Hypocrisy in retail and the need to make it a level playing field: Sunil Jain