Muharram being just a day after Dussehra this year, West Bengal Chief Minister Mamata Banerjee has issued a fatwa banning any idol immersion on October 1, that is, the scheduled day of Muharram. Ostensibly a measure to maintain communal harmony, the move is actually an instance of blatant Muslim appeasement.

“Why should we take the blame because of some people who are trying to take political advantage?”

On top of that, she accuses others of deriving political mileage from the issue. She asked, “Why should we take the blame because of some people who are trying to take political advantage?” The people she is referring to are apparently Bharatiya Janata Party leaders. But who is giving them an opportunity to “take political advantage” in the first place? She and her party are brazenly dealing with dangerous Islamists, an example of which is the order to shift idol immersions; she can’t expect her political rivals to mutely watch her shenanigans. The Congress and the communists may have compunctions in playing the Hindu card, but the BJP has none; in fact, it welcomes such opportunities.

Should the people of West Bengal stop holding all public events because terrorists or other miscreants can trigger trouble?

PTI reported on August 23, “Banerjee directed SPs [superintendents of police] in the districts to talk to Durga Puja committees and Muharram committees regarding holding of their rallies, and said that there would not be any idol immersion on October 1, on the scheduled day of Muharram.” So, as per her firman, immersion will resume on October 2 and continue till October 4.

Her administration has rationalized the move on the grounds that the observance of Muharram and immersions could cause law-and-order problems. This is a very stupid argument. Every public event—Diwali, Holi, or any other festival, a cricket or football match, a political rally, a rock concert—can be the target of a terror attack. Should the people of West Bengal stop holding all public events because terrorists or other miscreants can trigger trouble? Should they stop celebrating all festivals?

Quite apart from being a cowardly approach towards terrorists and mischief makers, Banerjee’s decision is also an admission of her own government’s ineptitude. Law and order is the responsibility of the state; by banning immersion on Muharram, she has tacitly accepted that her administration is incompetent.

Then there is the obvious question: why doesn’t she ask the Muslims to shift their festival to some other day? After all, what’s good for the goose is good for the gander. She won’t do that, nor would any other Non-BJP politician do that—and rightly so. Muslims enjoy religious freedom as enshrined in our Constitution. But so do non-Muslims, and so they should be ordered to change their festival schedules.

Mamata Banerjee, however, doesn’t think so; she feels that the Hindus can be trifled with; she trifles with them all the time. Last year too, her administration tried to stop idol immersions on Dusshera, but the Calcutta High Court overruled her. She has done an encore. Her decision is again likely to be successfully challenged in court.

She is not so stupid as not to realize the legal fragility of her order; perhaps, she just wants to convey a message to the Muslims of her state—about a third of the population—that she cares for them more than the Hindus. Perhaps, her move is no different from reservations for Muslims in jobs and educational institutes announced by other state government; the official announcements are almost routinely turned down by the judiciary.

Mamata Banerjee’s fatwa is not just morally repugnant; it may also prove to be politically damaging. As I mentioned earlier, the BJP looks forward to, and usually gains from, polarizing situations. By the way, the social media is agog with saffron outrage. Some of the tweets are: “Mamata bans immersion of Durga, as Muharram is on the same day. Next, she will ask Hindus to leave Bengal, as Muslims live in the same place.” “There is no ban on Durga Puja immersions even in the neighbouring Islamic theocratic state of Bangladesh. Ban this Jihadi Trinamool party.” “Mamata playing Pujo politics? Restricts Durga immersion on Muharram. Governance or appeasement?”

The BJP is likely to capitalize upon saffron outrage. 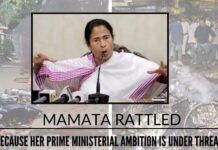