It is time for all the governments to work in a true federal spirit under one umbrella of guidance provided by the union government.

In the last seven weeks, India has changed a lot. But, according to the axiom “The more things change, the more they remain the same” India remained the same. There was a huge advantage India got when the Prime Minister took two decisions before other nations have. One is self-isolation and the other one is the lockdown. India was the first country that isolated itself from the world and then isolated within. Both these actions have ensured the growth trajectory of COVID affected cases in control when compared to the rate of growth that was seen in many other countries.

However, typical to the Indian psyche – let me explain with two examples. Every Indian parent expects their children to be toppers. Typical Indian child feels he or she is the Einstein, after achieving the first milestone in the long list of their parents’ expectations. The same thing is applicable to the Indian scenario even for the COVID issue.

Why suddenly everyone wanted to disregard the DBT way of money distribution? What is the guarantee that state governments do distribute the money to intended receivers? No one cares to answer because none asked these questions.

Like a typical kid, our Prime Minister thought he was the best leader in the world and his mission is accomplished. True that his decisions have amplified his image in the world to a new level. This was clear from the tweet by Piyush Goyal, who took time to remind us about the soaring popularity of Narendra Modi, while India was suffering lockdown and COVID-19. I never expected such an out-of-context tweet from him, as I really admire his capabilities.

The purpose of the lockdown was to break the chain. PM @NarendraModi ji has shown visionary leadership amidst the COVID-19 crisis. We have used the last 50 odd days to prepare the country. pic.twitter.com/CAIeWIwdWf

Representing the eternal frustrated Indian parent, the Congress attempted at another botched up attempt in relaunching Rahul Gandhi. At the core of RG Version-N.X was heavy criticism of Modi. Of course, it is his right to criticize Modi, but while doing so, he is expected to provide solutions too. Even during his prepped up talks with so-called geniuses, no concrete solutions were offered. All talk by entire opposition was Modi to give money to the poor, while the second rung intellectuals were talking about the federal structure and how states should be given more power – and of course money. They wanted the union government to let states give money to the poor. This brazen attempt at appropriating money meant for the poor was nauseating. Why suddenly everyone wanted to disregard the DBT way of money distribution? What is the guarantee that state governments do distribute the money to intended receivers? No one cares to answer because none asked these questions.

The first time in six years of his rule, Narendra Modi felt the pressure and succumbed to it. He blinked first not because the opposition charges were damning. He blinked because, just like the opposition, he too doesn’t have a solution on how to solve the problem – like many heads of nations. But, the Covid-19 crisis brought to the fore the core problem that plagued BJP for long. BJP suffers the problem of the quality of manpower. A number of administrators available to the party to lead it by handling critical portfolios are very less. In fact, the untimely demise of Arun Jaitley, Sushma Swaraj, and Manohar Parrikar has left a lot of voids that are yet to be fulfilled.

In fact, the union government has erred on managing the issue long ago and deserves criticism. But, the criticism it is receiving is purely political and has no substance in it. And, while everyone says the government should open economy, none said – How it should be done.

Even on reopening the economy, the government has forgotten something fundaments. Devoid of migrants, how can the metropolis and industrial zones restart economic activities? No answers.

Immediately after the lockdown Modi should have spoken to CMs and ensured migrants are sustained by the states. Except for Chandrasekhara Rao, CM of Telangana, no CM has requested migrants to stay. In Maharashtra, the way migrants are treated is as notorious as the ruling party. Expecting migrants to be sustained in Maharashtra is really too much. This resulted in the gradual exodus of migrants returning to their home towns using whatever mode of transport they got – or by foot. The easily available communication facilities have inspired migrants in all states – from Gujarat to Kerala to attempt to go home. Except for coining a catchy phrase like “Biggest migration after Partition” our media houses did nothing to stop the migrants from leaving the places where they were. Neither union government nor state governments have acted on these issues. In fact, in the guise of doing their duty of reporting ground situation, our media houses have sadistically enjoyed by the pains of migrants.

This is time to remember Kevin Carter, a photographer who won the Pulitzer Prize for covering the famine in Sudan. He committed suicide at the age of 33 after witnessing the horrors because he felt he was taking photos instead of helping the girl who was crawling to a food distribution shelter. I don’t expect our media houses to feel any shame or remorse. What’s the point of blaming them? They too are an essential part of the wretched society in which we all are part. Just like corrupt police and politicians and people in other professions, they too are thick-skinned and masters of hypocrisy.

While the unscripted scenes and actions of politicians and media houses were unfolding, on the other hand, the COVID cases were slowly, but steadily increasing. However, unlike in the month of March now the topic of discussion is not about the virus and deceased, but on how to re-open the economy. So, the trains are now running – taking migrants back to their native places. Plans are in place to gradually open up towns and cities. Packages are announced to ramp up economic activity. In the excitement created on economics, the apprehension on the virus spread was forgotten. Even on reopening the economy, the government has forgotten something fundaments. Devoid of migrants, how can the metropolis and industrial zones restart economic activities? No answers.

Sometimes it appears now the government decisions are similar to the batting of Indian lower-order batsmen who are expected to score 200 runs in ten overs with only four wickets in hand. One fails to understand the logic behind operating AC trains given the fact that the possibility of virus spread is more in a closed compartment than in a sleeper coach[1]. But, when the intention is to earn money by charging the fare of Rajdhani express, safety takes back seat.

An only sane voice heard amidst the nonsensical din in the last one and a half months was by Dr. Randeep Guleria, Director, All India Institute of Medical Sciences (AIIMS) who said amongst many other good observations “There has to be micro-planning. You cannot look at India as a whole…”

He was talking of containing the COVID-19 from spreading more. But, his advice is applicable even to the opening up of the economy. Here is the time for all the governments to work in a true federal spirit under one umbrella of guidance provided by the union government. The federal structure here doesn’t stop at the state level but goes down to districts, towns, industrial parks, villages.

As the new farming season will start in the next two months, ensuring the safety of farming labor is of utmost importance. It is going to be risky to provide seeds, pesticides, fertilizers to the fields, and ensuring the virus is not spread in the process. Sort of group/village level quarantine may be necessary and ensuring the material is disinfected or left untouched for a duration that eliminates the virus. Similarly, such group quarantine procedures need to be followed in the industry, business, trading sectors. When scores of doctors, nurses, and police caught the virus, with the increasing of economic activity, the number of patients will tend to increase phenomenally. So far, we were lucky enough to see sort of linear growth of cases in India, however steep the line was. But, as people restricted to their houses will now come out and mingle freely ignoring instructions. Few may fear for themselves but in a nation that takes pride in driving motorcycles without helmets, a number of people who would be adhering to social distancing will be equal to the percentage of drivers who use helmets voluntarily.

If the government machinery wants, it may not even take a week for the administration to put guidelines for each village/block/area and equip the local administration to enforce the guidelines. But, it has to be initiated from the top. Only a top driven approach can control the spread of the virus in India. Indians listened to Modi and heeded to his advice. It is again to Modi to plan, scheme, and implement better ways as the already strained administration will be handling both the virus and economy simultaneously. Perhaps, it is time for the administration to seek and take help from the private sector. From planning the local requirements and logistics to monitoring the situation, our IT industry can help the government to a great extent. In fact, it is highly surprising that despite lots of promises from several industrial tycoons, the government has so far not initiated a dialogue with them and avail their services. In fact, with the regression in the economy, much of IT staff would be ready to volunteer to shoulder the public responsibilities. However, the onus is on the government and administration to define the role they can play and use their skills to help the – society.

I hope someone in the government will take note and start “Micro-Management of both COVID-19 and reopening of the economy” together. 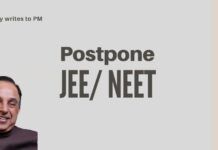