The best thing that can be said about the Narendra Modi government after four years is that… well, it’s not the Congress-led government. Clearly, this is not a very nice statement about a Prime Minister who had promised so much and aroused high hopes. This doesn’t mean that nothing has been achieved; some welfare measures have been efficiently delivered, resulting in electoral dividends, but the gulf between the expectations and results is very wide.

E-governance has helped citizens get passports; it has also eased provident fund

Given the fact that Modi enjoys considerable popularity, it is still possible that he retains office in the general election next year, but he has not been able to deliver what he had pledged he would. At the heart of his inability is his refusal to bid adieu to the Nehruvian Consensus; this meant that he went on to build a welfare state even as state capacity is grossly inadequate. It also implied that economic reforms would take a back seat.

Unsurprisingly, therefore, the biggest successes are in the social sector. Village electrification under the Deen Dayal Upadhyaya Gram Jyoti was carried out with some efficiency. Modi promised on August 15, 2015, to electrify all un-electrified villages within 1,000 days. As many as unelectrified 18,452 villages got power connections in 988 days, that is, by April 1, 2015. This is being followed by a Rs 16,320-crore Pradhan Mantri Sahaj Bijli Har Ghar Yojana to provide power connections to more than 40 million families in rural and urban areas by December 2018.

Under the Pradhan Mantri Ujjwala Yojana, almost four crore LPG connections have been given.

The Swachh Bharat Mission has received a great impetus from the Prime Minister, but its performance is mixed at best.

E-governance has helped citizens get passports; it has also eased provident fund.

The Modi government has shown competence wherever operations have been involved without fiscal or political complications, as in the above-mentioned schemes. No Opposition leader would slam the government for electrifying or cleaning villages; nor would they be critical of the decision to evacuate Indians from trouble-torn countries, something that was done commendably.

Programmes like Namami Gange and Skill India, have come to a cropper

But such unexceptional areas are not many; on such critical matters as bringing back black money from overseas banks, fighting corruption, galvanizing the economy, attracting investment, and generating jobs, tough decisions need to be taken. These haven’t been taken.

In some cases, the ruling dispensation has been brazen. For example, Bharatiya Janata Party president Amit Shah simply denied that any promise to get back the ill-gotten wealth abroad was made in the first place; it was just a chunaavi jumla (election rhetoric), not to be taken seriously. Similarly, the Modi government hasn’t done anything substantive to fight corruption. Its lawyers failed to get the 2G accused convicted. BJP leaders have hurled a zillion corruption charges at Sonia Gandhi, Rahul Gandhi, P. Chidambaram, etc., but haven’t dared to prosecute them. Except, of course, Subramanian Swamy, but he initiated the prosecution against Sonia and Rahul much before the BJP came to power; and, at that time, he was not in the BJP.

The economy has suffered hugely because of the quixotic demonetization and the shoddy implementation of the new goods & services tax or GST regime. Tax terrorism has gained new intensity. The man in the street was denied the benefits of low crude prices but now that these are rising, he is forced to bear the burden as fuel prices zoom.

The refusal to privatize public sector banks (PSBs) means that the taxpayer has to shell out money for their recapitalization—Rs 2.11 lakh crore in the previous and this fiscal. Meanwhile, the Insolvency & Bankruptcy Code (IBC) is yet to show results. Ditto with the Real Estate Regulatory Authority or Rera.

On the positive size, road building has gained some momentum. Similarly, private sector participation in defence production has got a fillip. Defence preparedness, though, has miles to go, as evident from the shortage of funds for capital expenditure.

Other programmes like Namami Gange and Skill India, have come to a cropper. Big claims have been made about the employment-generation potential of the Micro Units Development and Refinance Agency Bank or Mudra, but the claims have not been backed with empirical evidence. As for Smart Cities, nobody knows what these mean.

Foreign policy, too, has not got any great boost, the Prime Minister’s high-profile foreign visits notwithstanding. Pakistan persists with the export of terror to India, with international support from China. Besides, China continues to encircle India. Meanwhile, External Affairs Minister Sushma Swaraj has been reduced to tweeting and providing visas.

In short, the Modi government has not been able to do much because it has loath to discard socialism and non-alignment, the pillars of the Nehruvian Consensus. 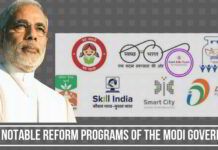 Trouble brewing in Modi’s backyard – A young boy poses a...