An editorial “In Modi’s Wake” in The Nation said that Chief of Army Staff General Raheel Sharif was in Kabul on Sunday on a day-long visit for dialogue on the re-initiation of the Afghan reconciliation process.

“When the COAS visited Washington earlier this year, he was urged to take matters in his hands and visit Afghanistan to put the negotiations back on track. In view of the recent tumultuous events, at the heart of which stands Modi, it had become pertinent to ease tensions between the two neighbouring countries,” it said.

The daily said it does not come as a surprise though that the popular opposition leader in Afghanistan has strongly opposed the inclusion of Pakistan in the peace talks with the Taliban, mirroring the widespread sentiment that Islamabad wants to control the insurgency.

The editorial observed that the security dilemma in the Middle East has made its way to Afghanistan, and there is no way to avoid it now.

“We have India and Russia to thank for this: with its 16 arms deals, Russian support for India’s permanent seat on the UN Security Council and India’s vocal support for Russia’s role in Syria. We can only wonder what the US thinks of all this; their darling Modi, armed to the hilt with Russian missiles…,” it added.

It went on to say that Modi has made it clear that he viewed Pakistan as a potential bridge between South Asia and Afghanistan.

“By striking breakthrough deals across Russia and Afghanistan, Modi has cemented his ties with his allies, bring Pakistan in the mix with diplomatic ingenuity. It is up to Pakistan now to decide what role it wishes to play in this love triangle.

“The economic bloc that is forming in the region can only be beneficial to all parties involved if there is peace in the region – something that does not seem to be what Russia wants, from Turkey to Pakistan, and something the US might want, but has not had the guts to really set in motion.”

The daily added that Pakistan should leverage the influence of members, such as China and Russia instead of calling upon its unreliable friend across the Pacific.

“Modi has realised the importance of this knowledge; that the Asian continent is where the power is.” 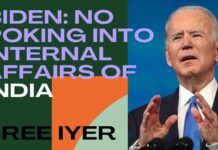