Comments: Reply by Henry d’ Souza, September 16, 2015 to this article that appeared on Sept 6

My claim that India was a Superpower for 23,000 BCE covers Sivaraman’s list of India’s achievements in the past: one of the largest economies of the world; the schools which India pioneered; and the achievements of Indian thinkers and doers.  By noting the defects of the present system, however, he has contributed to improvements which can be made.  More contributions are need to produce an educational system that India can be proud of.

India’s Mangalyaan1 illustrates what India can achieve if the best local brains can be tapped to solve a problem in the cheapest possible way.  Team ISRO’ probe orbited Mars for less than $100 million compared with NASA’S $671 million.  Its employees were paid a pittance compared with their international counterparts.  As other nations would not share their technology, Team ISRO had to develop its own, though India benefitted from past experiences in this field.  ISRO started a new business, space orbiting, which drew much criticism, but which would bring in hard currency.  It is therefore felt that with the right incentives other problems can be solved.

For clarity, the emphasis will be on key words in the title: Education, which means acquisition and creation of knowledge skills for its own sake, for jobs, and for a life-time; “For All” means that 100% of the population must be serviced; and “Indianization” means where possible, the whole process of delivery must be Indian.

It was in 1947 that the UN pushed this concept of Education for all, and developing nations accepted this enormous challenge.  Education for All (EFA) was emphasized again in 1990 by the international agencies:  UNESCO, UNDP, UNICEF, and the World Bank. EFA was to be achieved by 2015 and six goals were set: comprehensive early childhood care and education; all children, particularly disadvantaged girls, had to get free primary and secondary education; learning needs of children and adults had to be met; at least 50% improvement in adult literacy was to be achieved by 2015; eliminating gender disparities; and, education had to be improved in literacy, numeracy and essential skills.  Setting a deadline for achieving these goals by 2015 was found to be impossible.  Consequently, in 2000 a Dakar Framework for Action was introduced with Millennium Development Goals to which 189 countries signed.  AT this meeting it was realized officially that literacy was the key to development.  These forces illustrate how international organisations are impacting a national system, especially emerging economies.

Consider the first stage of education, prenatal and postnatal education, which deal with fertility problems, adoption, diet and exercise, breast or bottle feeding, and abortion.  At this stage, education is usually done informally by specialists in the field.  But international organisations, like World Organisation of Prenatal Organisations, has influenced nations to, for example, ban sex determination practices.  In 1995, for instance, it was discovered that India had 50 million “missing” females, a sharp increase in the last two decades; the ratio used to be 102 males to 100 females in 1990, but five years later it was 106.9: 100.

In 2012, the UN published a report which showed that private industry in India developed a booming industry to tackle infertility.  It is estimated that the industry, with 3000 clinics, is worth $400m a year; the cost averages £4000 per customer and surrogates can earn as much as $6,500 each.  With criticism that these clinics were “baby factories” for the rich, stringent laws had to be introduced: strict visa requirements for same-sex couples; all clinics had to be registered and inspected; surrogates had to be between 21 and 35 years of age; the system had to have insurance and notarised contracts.2   Most of the customers are foreign, but as the social structure changes in India the percentage of local customers is likely to increase.  Nursery schools in the market economy, fit into this category as they are relatively few and there are more pressing educational problems for Government to solve.

Literacy for adults comes into the category of pre-schooling.  Prime Minister Modi said that the priority should be “toilets before temples.” We should alter that to read, “literacy by temples” which would include toilets before temples.  Temples should monopolise this sector.  The definition of literacy should change from reading, writing and numeracy to literacy of adult needs.  Literacy of carpentry and religion means having knowledge of, and competency in a subject. Literacy can be oral knowledge of a coding system in a social group. The only written requirement is the ability to write a name and a signature, which will be needed for bank accounts.

The curriculum should be a unified combo, just one “subject”, of simplified subjects taught in a primary school.  A video would have the essentials of a banking system pertaining to an individual (maths), knowledge of key officials at village, state and national level (history), soil nutrients (biology), assembling toilets etc.  Adults should be able to master, orally, subjects taught to kids in less than six months, on some weekdays and weekends.  The main teaching aid would be a video since villagers generally have a TV before they buy a fridge.  That’s where they get their news and entertainment.  Centers like the village offices, temples or local pubs could also be venues for these programmes.  About a hundred sample oral tests should be made available to registered adult students and the final exam would be one of these tests, unchanged.  A pass mark for a Certificate of Primary Education would be 60%. The IT sector should be able to build the required technology.  In this way, the nation can be made literate in less than six months.  Ideally, a teacher would not be required.  The temple, which has a tradition of offering basic education, would have made a godly contribution to the nation.

At the school–going age, Indianization has taken place in the structure of the basic education school system.  Countries that would be following the US system would have a twelve-year system of basic education; those following the British would have a system of eleven-years; India has a ten-year system which is followed by two years of technical and specialized subjects.

At this basic level, as with other levels, the question of standards arise.  Britain followed the US in requiring that all teachers be graduates.  Finland which reportedly has the best system and standards requires teachers to have a Master’s degree.  But for an emerging nation there is no need to have a degree for teaching in elementary school; good students who’ve been through secondary school and have a year’s teaching qualification can perform well at elementary level.  But teachers in elementary schools must have a good mastery of pedagogy; their colleagues in secondary schools should have at least a degree, though not all degrees are equivalent among nations.  Teacher qualifications can be raised as money is available.  The days when the saying, “if you can, do, if not, teach” are long gone.  If education is the ‘cornerstone’ of development, the quality of teachers is the most important ingredient for maintaining standards.  In the West, salaries for teachers have been raised by union pressure.  Some enlightened governments do not need such pressure to realize the value of teachers.

At the tertiary level, every state should build at least one university that is second to none, in the world.  That would mean that a university should have excellent professors, an outstanding infrastructure and textbooks, and so on.  The issue of quality will then percolate downwards to other institutions.  Every state should be able to coordinate its tertiary institutions.

It is assumed that a sub-system will fit into a national system without major glitches, that a sub-system is not an end of itself, that the emphasis will be on quality not quantity, that Indian institutions will keep in touch constantly with world agencies, educational institutions and standards, and that India will contribute to the world, as it has done with yoga which the Prime Minister has selected, as much if not more than it will receive from the rest of the world. 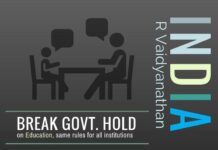 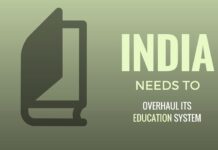 A transformational India needs to overhaul its education system