[dropcap color=”#008040″ boxed=”yes” boxed_radius=”8px” class=”” id=””]S[/dropcap]ystematic attempts have been made in the last few decades to completely destroy our educational system. First it was the communist books imbibing communist values and totally ignoring leaders like Netaji/ Rash Behari/ Sardar Patel/ Savarkar etc in our textbooks and focusing only on Nehru Khandan. This was possible due to historians loyal to the Nehru Family.

Then VP Singh brought about reservation for OBC’s in Education. Most of the kings in the Pre-1947 India were OBCs and India is the only country where erstwhile rulers got benefits out of “positive discrimination”. It became absurd as in Tamil Nadu where the reservation goes up to 69% and the population covered is more than 90%. In Tamil Nadu for instance in the last decade all the top hundred rankers are from reserved category and practically the quota idea has become a laughing matter.

Third, the “historic” Right to Education Act under UPA regime was enacted. Many feel that it is the brainchild of Church run educational institutions to kill other educational institutions. This Act compels schools to have reservation up to 25% in schools for ‘poor and educationally backward children”. It is only for schools managed by Hindus not for Christian or Muslim or Parsi and other minority run schools. Also the act talks of “free” education for these children to be reimbursed by state under a Public/ Private Partnership basis. Most State Governments have not reimbursed them for years.

[dropcap color=”#008040″ boxed=”yes” boxed_radius=”8px” class=”” id=””]T[/dropcap]he race to claim minority tag has become virulent with Tulus in Karnataka becoming minorities and Telugus in Chennai claiming minority status. Lingayats — who run a large number of educational institutions — claim that they are not Hindus but Veerashaivas and the most unbelievable case is that of Ramakrishna Mutt claiming that they are not Hindus. All this to primarily come out of control of the then left Government in West Bengal. Fortunately that case was rejected by the Supreme Court.

The whole situation is bizarre where in if you are Hindu then better not run any educational institution since you are controlled by Government unlike Church run institutions. Slowly we may have situation where in only Church run schools and colleges will be present in the private sector.

Governments are run by rhetoric and vote-considerations and not by any concern about quality or how future generations will shape up.

[dropcap color=”#008040″ boxed=”yes” boxed_radius=”8px” class=”” id=””]W[/dropcap]hat is the way out for Hindu population? First and foremost the idea that Government will help in the process has to be given up. The government in India is a Socialist/ Secular Government and any Government has to work under that preamble. States not only may not help any Hindu school but may coerce and make them bleed since other schools cannot be touched.

Hence the time has come for Hindu owners/ managers of schools who are still interested in running the institutions to think of innovative and revolutionary ways of dealing with the situation, First and foremost the idea of government recognition is obnoxious in this 21st century where Government recognition is a negative point for education. Government consists of semi-literate politicians and bureaucrats with bloated egos. Over and above that it is corrupt to the core.

Hence schools should be able to proudly proclaim that “we are not recognized by any Government”. If the word School is not possible call it Gurukulams.

All schools should jointly form a quality or accreditation agency which should be the primary watch dog of quality of these schools. A similar system should be developed for colleges. If the quality is good then employers will come in. If degrees are issues then Certificates of different levels can be given. Many universities are moribund and appointment of Vice Chancellors are based on cash and caste. So the existence of those institutions are irrelevant. They will be monuments of failure representing the secular/ socialist India.

[dropcap color=”#008040″ boxed=”yes” boxed_radius=”8px” class=”” id=””]W[/dropcap]hat is the main strength of the Government – more so State Governments? It is their ability to allot land for setting up new institutions. With the development of Internet/ Android etc. large tracts of land are not needed for schools/ colleges. For schools thrice a week meeting of children can be organized –even in the large halls or balconies of some of the parents.it is very important that government hold on education is broken completely and it becomes real knowledge centric systems and not cash /caste centric systems.

Most important point is the ability of the Gurukulams to teach truthful history of our past and inculcate a sense of pride in being Indian. Over time the colonial genes may be modified and we may be less wired to the whims of the white man.

Deserving students can be given fees waiver [based on the decision of parents/ teachers/ management] and if needed loans can be arranged for deserving ones from Non-bank Finance companies [existing and new ones started for such purposes].Most of the middle / upper class in India has opted for their own “enclaves “with power/ water/ security etc. The time has come to create similar educational enclaves unsullied by the Government.

This is only a preliminary draft of a possible future action. It needs substantial refinements and modifications. But the important point is that future education is in danger of being only with Church run groups. If that is considered as not desirable then this is the time to act. The Government is a prisoner of the “secular” set up and completely impotent to help in this situation where the future is bleak. Governments are run by rhetoric and vote-considerations and not by any concern about quality or how future generations will shape up. 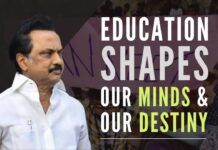