The current in-fighting has become a major source of worry for Fadnavis because the home ministry is directly under him and the state is on the threshold of assembly elections.

Gang war within the Mumbai police force is rearing its head again. High-profile Indian Police Service (IPS) officers have their favourite inspectors and the latter work against each other so that their bosses get plum posts and they are rewarded with good postings in return.

One of the inspectors was so powerful that he got his boss posted some years ago as the Mumbai Police Commissioner on the strength of his huge money power and “setting” in the home ministry in Mantralaya. In fact, there was a time when the uncrowned don of Mumbai, the late Varadaraj Mudaliar,  was so close to some IPS officers that inspectors used to line up outside his home in Vasudha building near King’s Circle garden with requests for transfer to lucrative police stations like Lamington Road, Colaba, Dongri etc. In fact, once I witnessed a Deputy Commissioner in uniform entreat the don for a “good posting”. Incidentally, Varadabhai was such a shrewd bhai that he started sponsoring the entry of his boys into the police force through the state public service commission.

The rivalry between two legendary encounter specialists, the late inspector Vijay Salaskar and Inspector Pradeep Sharma, who were backed by two different lobbies of IPS officers, became so intense that the government had to intervene and broker a truce. The rivalry between Rakesh Maria and Satyapal Singh, now a Union minister, is also well known. A brilliant officer, Maria was humiliated by being prematurely removed from the post of police commissioner for allegedly evincing too much interest in the Sheena Bora murder case. The fact is that he took a personal interest in the case only at the instance of the then Union Finance Minister Arun Jaitley. Incidentally, the police raided Singh’s flat in Oshiwara and seized several porn clips[1]. Singh said he had leased out the place to someone through a broker and he had nothing to do with the lessee.

The current phase of rivalry is between the chief of the Anti-Terrorist Squad and former joint police commissioner of Mumbai Deven Bharti and the present commissioner Sanjay Barve. Barve is due for retirement and indications are that he might be given an extension by chief minister Devendra Fadnavis in view of the upcoming elections. This has upset the calculations of a senior IPS officer (not Bharti) who has been desperately lobbying for the prestigious post of Mumbai’s police commissioner for quite some time now.

Recently, as many as 12 police inspectors, including some excellent officers like Nitin Alaknure and Dinesh Kadam, applied to the Director General of Police Subodh Jaiswal for transfer to the ATS led by Bharti. Barve was infuriated that these officers did not route their requests through him[2]. He got show cause notices issued to them and has even proposed stopping of their annual increment. Mysteriously a report appeared in a section of the Mumbai media citing a complaint from a builder to Fadnavis accusing Barve of trying to knock off money more than what was due in a failed property transaction[3]. Barve has denied the allegation.

The current in-fighting has become a major source of worry for Fadnavis because the home ministry is directly under him and the state is on the threshold of assembly elections. He has to crack the whip before the situation spirals out of control. 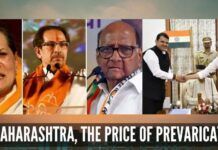 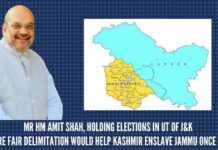 At last crooked corrupt Chidambaram in the custody of CBI and...

Only tricolour will flutter in J and K, says Court