We are also uploading this audio and conversations translated into English for wider reading to expose the blackmail journalism using women journalists and sex workers.

This explosive news of blackmailing in the garb of journalism by Mathew Samuel and Angel Abraham of Narada News portal was first reported by a Malayalam portal Daily Indian Herald. The portal uploaded the audio of duo’s conversations in their mother tongue Malayalam.

We are also uploading this audio and conversations translated into English for wider reading to expose the blackmail journalism using women journalists and sex workers. Mathew Samuel was the arranger of women to military officers and Defence Ministry for the erstwhile Tehelka Magazine’s sting operation conducted by Tarun Tejpal and Aniruddha Bahal in early 2000.

In the audio tape Angel Abraham shares her sexual encounters with Chief Secretary Jiji Thomson and other racketeering activities with her boss Mathew Samuel and plans the future course of action. The conversation shows that Mathew Samuel and Angel Abraham were planning and analysing and what to do further after honey trapping officials and ministers.

Mathew Samuel landed in Delhi in the mid-80s and was a frequenter in Congress Headquarters in Delhi and was seen mostly with Kerala MPs.

In early 2016, Mathew Samuel started Narada News portal by publishing a sting operation against several TMC MPs accepting cash during 2014 Lok Sabha election season. These were published in March 2016, when the state was going to Assembly elections. The TMC MPs targeted were K D Singh’s rivals in the party. Due to this expose, he became friendly with CPI(M) leadership and also widened operations in Kerala and Gulf region.

Mathew Samuel landed in Delhi in the mid-80s and was a frequenter in Congress Headquarters in Delhi and was seen mostly with Kerala MPs. He was associated with journalist Aniruddha Bahal’s sting operations of Tehelka in defence scams. Mathew Samuel was the arranger of prostitutes to conduct sting on several military officers and as Tehelka became a success, Samuel also started meddling into journalism. The latest expose shows that Mathew Samuel continues his blackmailing business and using women to sexually induce people in the garb of journalism.

Published below is the English translation of conversation between Mathew Samuel and Angel Abraham (Twitter ID: @angelabraham002). The conversation was in January 2016 after a sexual encounter with the then Kerala Chief Secretary Jiji Thomson.

Mathew Samuel (MS): What is in your email?

MS: Why can’t you open yourself?

AA: I can’t do it in my iPad as it is out of charge. I told Ram to charge it. He will come soon. Where are you now? At home?

MS: I am at morning walk.

AA: Oh…you are on morning walk!!! Here I just got over from sleep and still in bed. This room is full of sexy things and thoughts. I am still on the hangover with him. His (Jiji Thomson) sexy dialogues are still in my mind. The whole day and night sexy things.

MS: Oh… hope you recorded all?

MS: What did he tell you?

MS: Did his driver not hear all these things?

AA: Not in his car… it is in VIP room at night… in car he spoke only in English and the conversation was decent.

MS: OK Ok… He should not know that you are meeting persons through Baskin.

AA: No… no… I also have to meet Jiji again on Tuesday. Expected to be afternoon. But time not confirmed.

MS: Make it in the morning. Importance to be given to Baskin’s appointment. He (Jiji) will come to us and he will do now whatever you say… ha ha ha.

AA: (laughs). So uncle says I should meet Baskin.

MS: May avoid him… avoid Jiji… try to avoid meeting him on Tuesday.

AA: Let me try to find something. We can’t tell Jiji about meeting Baskin. What to say… that is what I am thinking. My periods are already over ha ha… Otherwise i could have told that.

AA: Ha ha ha… not Baskin’s periods? My PERIODS… it is over previous week… otherwise i could tell him that I have a stomach ache and i want to avoid meeting…

MS: Oh…Oh… your Periods… ha ha ha… I thought some other.

AA: So tell me what to say… What are the options? I can’t say I have to go to KSIDC or SIDCO (Two Kerala’s PSU units under Industries Ministry). Because he will get to know…. things are getting tight… don’t you feel?

AA: Meanwhile let me tell where should I book tickets to Delhi? From Trivandrum or Kochi Airport?

AA: See if I go from Trivandrum, mother and kid will be with me and the kid will always with me calling Mummy Mummy Kimmy Kimmy… so why should we create doubt while now we are having good relations… that is my question.

MS: That is a good question.

AA: My next question is – if from Kochi Airport, that Harris is a frequent flier. He is always doubting us. He is inquiring about us. Shahid called me seeing at hotel lobby. That means they are tracking us.

AA: Yesterday he called me after I was getting from KTDC Hotel. I pick the phone… he started asking me… Hai Angel, how are you etc etc… started asking me about the details of the project. I suddenly changed the subject asking him about his fasting during Ramzan festival. I told him i will call him after reaching the ladies hostel and tell Moidu. He is aware that I am in Trivandrum and so I can’t lie. Moidu told me previous day he asked about my whereabouts. He must have seen me in Trivandrum.

MS: Yes Yes… means he is tracking us.

AA: Moidu told me to never lie to him. Tell him that we are trying to get his project gets signed. Moidu says next time i meet Minister Kunjalikutty, I should go with total presentations and proposals and stay there to get it signed and passed on to private secretary and other officials to get clearance… Get Minister’s clearance noting in the file that day itself and then passed through Chief Secretary (Jiji Thomson) fast. This is what Moidu wants me to do.

AA: Moidu is adjustable and friendly. That i can deal. My problem is travelling with Mother and son and people will notice me. You know this boy won’t leave me and always behind me with Mummy Mummy Kummy Kummy… You know the situation… we have an image created… all our image creation will be spoiled at the last minute… you know that is my tension.

AA: I have another plan… brother RK took ticket for train in 21 and back by 28. You know mother can’t manage son alone. That is my thinking.

MS: Don’t worry. I will make a plan on this and call you in the night. I just told Ram to bring all and also liquor.

MS: Don’t be out of order after boozing. Ram is bringing. How can he give liquor to you?

AA: Not a problem. I will get out of hostel and collect the packet. Ask him to pack inside food.

MS: Don’t be out of order by boozing… ha ha

The audio conversation can be listened here – 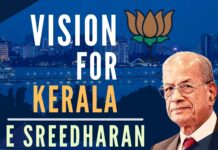 BJP’s CM candidate Dr. E Sreedharan on his “Vision for Kerala” and the four things he would focus on 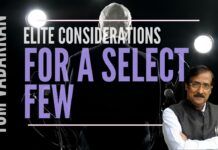 JNU Vs Other – How Family sees their child’s future in...