[dropcap color=”#008040″ boxed=”yes” boxed_radius=”8px” class=”” id=””]T[/dropcap]he projection of RJD Chief Lalu Prasad as the harbinger of `Jungle Raj’ was the leitmotif of the BJP campaign against the Grand Alliance in the Bihar polls. The voters may have squarely rejected that alarming prognosis, but Chief Minister Nitish Kumar is aware that maintaining law and order will be a big challenge, given the fact that the elements that let loose a reign of terror during Lalu-Rabri rule between 1990 and 2005 are merely dormant. Under political patronage, they could once again start calling the shots.

The state’s crime graph shot up during the last few days. Kidnapper gangs have become active and shopkeepers in Patna have began to talk about bringing down the shutters after sunset. Just four days ago, the state was rocked by the brutal killing of a police inspector at Lalganj in Vaishali district, just 60 km from the state capital.

After his swearing-in on Friday, Nitish has swung into action to restore confidence among the people by giving firm directive to police bosses not to entertain any political interference in tackling cases of crime.

[dropcap color=”#008040″ boxed=”yes” boxed_radius=”8px” class=”” id=””]I[/dropcap]n a three-hour video conference session with Inspector Generals of Police, DIGs, Superintendents of Police and District Magistrates, Nitish asserted there would not be any compromise in maintaining the ‘rule of law’. This is seen as a clear message to those elements that might have felt empowered due to the return of Lalu Prasad in the centre of Bihar politics as a `kingmaker’.

Significantly, Nitish has kept the Home portfolio with himself, giving clear signal that it was one of the most priority areas for him.

Talking to media persons after his discussion with top police and civil officials, Nitish said the police have been directed to act against a law breaker irrespective of his standing and affiliation.

Significantly, Nitish did not invite Deputy Chief Minister Tejaswi Yadav to attend the meeting. But Chief Secretary Anjani Kumar Singh and Director General of Police PK Thakur were by his side during the discussion.

[dropcap color=”#008040″ boxed=”yes” boxed_radius=”8px” class=”” id=””]T[/dropcap]o the relief of Nitish Kumar, Lalu Yadav has also tried to convey to his supporters that the era of the past will not return and criminals will not enjoy political patronage any more. During the poll campaign, Prime Minister Nrendra Modi and all senior BJP leaders tried to create fear psychosis among the voters by claiming that if the Grand Alliance was voted to power, Bihar will see the return of ‘Jungle Raj II’.

Nitish Kumar knows that his first test will on the law and order front. If he was able to silence the Doomsday forecasters, her would have overcome of the many challenges that stare at him. 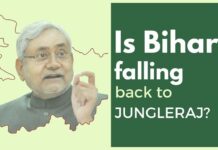 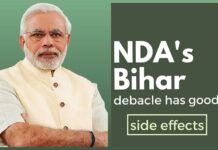