Is there a link between the low turnout of voters in Kashmir following violence and the sudden interest on India’s northwest border state from across the line of actual control?

Is the changing line of the United States of America vis-à-vis Pakistan and the latter’s support of terrorism in the wake of the Mother of All Bombs being dropped in Islamabad aided IS tunnel network in Afghanistan’s southeast border mountains the prime reason for the sudden revival of the Khalistan bogey in India?

Is the notorious Inter-Services Intelligence back to its dirty tricks again?

Is there a link between the low turnout of voters in Kashmir following violence and the sudden interest on India’s northwest border state from across the line of actual control?

[dropcap color=”#008040″ boxed=”yes” boxed_radius=”8px” class=”” id=””]P[/dropcap]unjab is the only state that gave the Congress a consolation prize during the 5 state assembly elections held recently. Should one read more into the North American angle – the visit of Canadian Defence Minister juxtaposed to American NSA McMaster’s visit to the Asian subcontinent?

“I will continue with my visit to Punjab and remain focused on strengthening the ties that bind Canada and India. As a Sikh, I look forward to visiting Harmandar Sahib [Sikhs’ holiest shrine]. My goals for this visit are productive meetings with the Government of India and the Indian military,” Sajjan told KV Prasad, the daily’s writer in writing.

“I don’t support the breakup of any country. I’m a Canadian. I want to focus on Canadian issues”, Sajjan had stated in a statement to the Vancouver Sun, the Indian Express said in its report.

Sajjan belongs to the World Sikh Organisation [WSO], a Canada based Sikh advocacy group. It is known to be an open supporter of the so-called independent Sikh state of Khalistan carved out of the Punjab on the Indian side.

Harjit Sajjan’s election as Member of Parliament from Vancouver South in British Columbia on October 19, 2015 resulted in over 4,000 Punjabi-Sikhs to quit the Liberal Party. The quitters accused Trudeau of using WSO for votes and “manipulating” fundamentalist Sikhs.

In its note sent to the Punjab government on April 5, India’s Ministry of External Affairs [MEA] described Sajjan’s illustrious career for having served Canada and his community as both a soldier and a police officer.

“Harjit Singh Sajjan is a retired lieutenant-colonel from the Canadian Armed Forces and a combat veteran. He was deployed to Bosnia-Herzegovina and served three separate deployments in Kandahar, Afghanistan,” the MEA bio note said.

The concept of Khalistan, however, isn’t worth a burnt out matchstick.

Continued…
Note:
1. Text in Blue points to additional data on the topic. 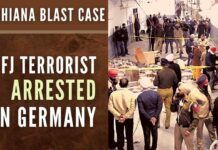