[dropcap color=”#008040″ boxed=”yes” boxed_radius=”8px” class=”” id=””]I[/dropcap] started meditation at the age of six. At that time, sitting for meditation every day meant trying to quieten the millions of thoughts that flooded my mind. Years later, I learned that meditation was much more than sitting down and trying to empty my mind.

In fact, the more you try to empty your mind forcibly, the more thoughts arise. It’s easy to get trapped in the mesh of thoughts and waste hours before you realize that time is being wasted. To solve this issue, I turned towards reading books on how to meditate.

The isolation of the so-called death gene, if it exists, may pave the way for the medical scientist to manipulate it by genetic engineering

However, while these books were great, they were not a replacement for a teacher. Through my teacher, I was introduced to meditation at a very young age. The principles and concepts of meditation led me to the pursuit of my goal in life. I planned to become a physician whose goal was to correlate science with meditation and find a rationale for the miraculous results that one can achieve with meditation.

Controlling age-related body changes has been an important concept for practitioners of yoga and meditation in the East for hundreds of years. Esoteric techniques that help prevent the normal, age-related decay of organs and tissue have been known to exist and be practiced amongst numerous yogis. Many yogis have been known to live for more than a hundred years. Over the years, scientific research has supported this beneficent effect of meditation and yoga and their role in controlling different diseases.

[dropcap color=”#008040″ boxed=”yes” boxed_radius=”8px” class=”” id=””]L[/dropcap]ife on earth has developed from its minutest forms, which might have been an egg, a seed, or a zygote (as in the case of mammals). All these forms are unicellular. Whether an egg will develop into a ferocious crocodile or a beautiful bird that flies depends entirely on the message that is coded therein.

DNA units, or genes, contain these coded messages and are found in cells constituting an organism. Science, until now, has been obsessed with the concept that once an organism develops into its adult form, its future life and finally death are minimally controlled by genes.

Thus, it was believed that when a zygote in a mother’s womb developed into a neonate after birth and to a child and a man thereafter, his genes did not dictate his further course of development and certainly not his death. Death, instead, was considered a cumulative result of aging and disease. It was also believed that normal wear and tear produced aging, decreasing the efficiency of the body’s repair mechanism and finally leading to a state where accrued damage to body parts like the heart or brain stopped them from working, resulting in death. Similarly, a disease also may prompt irreparable damage of certain organs, precipitating death.

Yet, these traditional concepts of death that science has propagated for the past few centuries were torn to shreds when research revealed certain astonishing facts. It is now believed that even death, to a certain extent, may be programmed.

[dropcap color=”#008040″ boxed=”yes” boxed_radius=”8px” class=”” id=””]J[/dropcap]ust like the DNA codes that determine the development of an organism from its initial form, the time of its death is also coded. Evidence garnered from scientific research over the past couple of decades has proven this to be true particularly in lower life forms, such as insects and fish. In these organisms, death, in a way, is predetermined. But in human beings it remains unclear whether any genetic programming initiates or at least plays a role in death.

The study of diseases like progeria, a disease of accelerated aging, lend credence to the scientific belief that genetic programming may influence aging in human beings. Although genetically mediated aging could lead to death, in most cases, external factors precipitate it, including disease and accidents.

The traditional concept that an organism’s death is exclusively a random event not predetermined by its genes was first countered by study of life patterns of the Pacific salmon. This fish dies rapidly after spawning. Research has elucidated that its death is precipitated simultaneously with the inactivation of genes responsible for growth and development.

Similar studies, including those involving epidermal cells in human skin, clearly demonstrate that aging and finally death of the cell are genetically programmed. In fact, certain biologists are of the opinion that even humans may have a gene or a group of genes that induce senescence and death. Although a frantic search is on for the putative “death gene”, nothing specific has been documented as of this date that conclusively indicates its existence.

[dropcap color=”#008040″ boxed=”yes” boxed_radius=”8px” class=”” id=””]I[/dropcap] was in medical school when I met Dave. Dave was like any old man, almost bald, with a few tufts of silvery hair at the sides of his head and around his ears. His eyes had settled deep inside hollow sockets, with loose skin tags hanging around his cheeks. His skin was rough and wrinkled, thrown into folds, typical of senescence. He walked with a stooping gait, and osteoarthritic pain – a common complaint among the aged – plagued him considerably. Although cutting a perfect picture of an octogenarian given to a sedentary lifestyle, there was a fallacy; Dave was 20 years old, a victim of progeria, what in common parlance is known as premature aging.

Dave is one of those unlucky examples that lend credence to the hypothesis that a group of genes may provide a code for aging and death in humans also. In progeria, the diseased person suddenly becomes old. The adolescent develops cataracts, fat gradually clogs all of his blood vessels, his skin forms loose tags, and his hair quickly becomes gray and falls out; the classic signs of senescence.

It is now widely believed that in these individuals, most of who die in their late 20s, the “death gene” is switched on earlier than scheduled. Although no such genes have been isolated, theories suggest that a DNA defect in this disease generates an abnormal protein. This abnormal protein, progerin, is suspected to accelerate aging. Yet, the exact genetic abnormalities that cause such premature aging syndromes are far from clear.

The isolation of the so-called death gene, if it exists, may pave the way for the medical scientist to manipulate it by genetic engineering, a technique that is fast becoming an established form of treatment. Most evidence in humans points against any one gene being responsible. Many different pathways merge to produce aging, but these pathways certainly involve impaired repair of DNA.

However, the good news is that we humans do not have to wait for technological advancement to ensure a long life. Enough evidence has demonstrated that meditation and yoga increase human lifespan by decreasing infection and disease. Disciplined living, healthy foods, regular exercise and meditation play a large role in helping to prolong life. 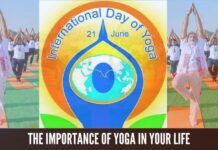 The importance of Yoga in your life 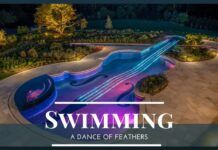 Swimming – A dance of feathers 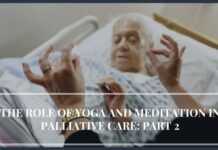 P2: The role of yoga and meditation in Palliative care to improve resilience and psychosomatic balance

UP doctor struggles to save mother’s life; raises money through crowdfunding