[dropcap color=”#008040″ boxed=”yes” boxed_radius=”8px” class=”” id=””]T[/dropcap]he Interim Governor of Tamil Nadu, Vidyasagar Rao, is in the most unenviable position, due to the prevailing paradoxical political situation. I’ll explain why I call the situation paradoxical towards the end, and suggest a fair way out.
Though Police may have interrogated the MLAs and no one may have mentioned that they are under captivity, the very fact that they are unwilling to or unable to come out only because ‘there could be efforts at horse-trading by the OPS camp’ sounds mysterious.

Many people say, now that the SC had delivered its judgment on Sasikala’s DA case, and the group led by Sasikala which has a sizeable majority in the TN Legislative Assembly, has elected Edappadi Palanisamy as its leader, and since O. Panneerselvam (OPS for short) hasn’t been able to show a list of more than a dozen MLAs, the Governor has to swear in Edappadi Palanisamy as the CM.

Except that the MLAs in Sasikala group have been confined to the privately-owned Golden Bay Resort since February 8, when the issue of who should be the CM erupted. Though Police may have interrogated the MLAs and no one may have mentioned that they are under captivity, the very fact that they are unwilling to or unable to come out only because ‘there could be efforts at horse-trading by the OPS camp’ sounds mysterious.

[dropcap color=”#008040″ boxed=”yes” boxed_radius=”8px” class=”” id=””]S[/dropcap]o, it makes sense for them to stay with the group that has 124 MLAs (who were picked up wholesale right at the start) rather than just 11 that OPS has. Unless all the MLAs have a chance to interact with each other and act based on their free will, the safest thing for them to do is to vote with the Sasikala group, …even if they are convinced that OPS will make a better CM, OPS has the backing of the vast majority of the people at large, they have suspicions about Sasikala’s and/ or Palanisamy’s credentials, they suspect Sasikala’s role in the death of their dearest leader Jayalalithaa, they suspect that Jaya may have got involved in the DA court case only because of Sasikala, they suspect Sasikala’s intention in bringing back into the party her own close relatives (who Jaya had resolutely distanced from the party) and inducted at the top positions, they believe Sasikala’s proximity runs the risk of losing their political future, and so on.

If Palanisamy were to be sworn in as the CM, his party would issue a whip to the MLAs and those who vote against the whip will be disqualified as MLAs;

Why then will they stick to Sasikala? Because 4 ½ years in office is not something one can be easily wished away. They may wish to believe, “Who knows, over the next 4 ½ years, so many things will change, and so, we may be able to get the people to accept this wrong move on my part”.

But these are NOT the reasons why the Governor should want the MLAs to come out of the resort and vote of their own free will, after being with the people, in general and the electorate of their constituencies, in particular, for at least 2-3 days. Here’s the one clinching reason:

If Palanisamy were to be sworn in as the CM, his party would issue a whip to the MLAs and those who vote against the whip will be disqualified as MLAs; this applies even to OPS. So, there is no question of affording an opportunity to OPS if Palanisamy were voted out.

So, assuming that some of the MLAs are in the resort due to some kind of coercion, their fear will be that even when they come out of the resort, they won’t be able to vote of their own free will, as they will be disqualified as MLAs.

[dropcap color=”#008040″ boxed=”yes” boxed_radius=”8px” class=”” id=””]T[/dropcap]his is why I called this situation paradoxical. What you think is the right solution is worse than the problem you’re trying to address. What kind of democracy can this be, where we would want the Governor to swear in a wholesale horse-trader as the CM for fear that the opposing CM candidate may do horse-trading?

If the Governor swears in Palanisamy as the CM of TN, he will set not just a bad precedent, but a dangerous precedent.

What is worse, this will set a very bad precedent in Indian politics, that the person who buys all (or most of) the horses wholesale in the horse-trading game, to start with, can play “Heads I win, Tails You Lose” game. And it is the other party that will be accused of attempting horse-trading.

If the Governor swears in Palanisamy as the CM of TN, he will set not just a bad precedent, but a dangerous precedent.

One way this can be resolved is to promulgate Governor’s rule for an indefinite period and then, after the MLAs come out of the resort and have mingled with their electorates, within a short time, call for a composite floor test. By this time, the MLAs would have heard everyone including OPS and their electorate, and taken all factors into account before voting. Or, the Governor may come up with some variant of this option that addresses all the issues highlighted here. 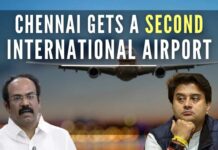 Learning the art of abuse through language from leftists