[dropcap color=”#008040″ boxed=”yes” boxed_radius=”8px” class=”” id=””]E[/dropcap]xactly 11 years ago the Vidarbha Cricket Association, headed by Shashank Manohar, refused to give the Indian cricket team a spin-friendly pitch and they lost the Test and with it the series against Australia on a Gabba-like green top.
The almighty Sourav Ganguly and his spin ally Harbhajan Singh are perceived to have pulled out on the morning of the match looking at the pitch. The captain cited a chronic hip inflammation and Harbhajan a stomach bug as reasons. The Australians quickly caught on to dub their health problems as “greentrackitis”.
Under the same Manohar’s stewardship today the team got a track to its liking in Mohali and the first Test against South Africa was over in less than three days. He was then fighting the establishment of the late Jagmohan Dalmiya and today he wields all the power.
[dropcap color=”#008040″ boxed=”yes” boxed_radius=”8px” class=”” id=””]C[/dropcap]uriously, the Nagpur curator insisted that he made a “standard” pitch that would turn from Day 3 while the Mohali man said he could not do much with an “old one” laid years ago. Ganguly was livid with the pitch, more so as he had clearly told the curator to shave off all the grass, whereas Virat Kohli is happy that he has got one to his bowlers’ liking if not the batsmen.
Kohli could afford to say that the players couldn’t care less what the world thinks of the pitches so long as they get to win matches, even if they win them in three days playing to empty stands.

It would be interesting to know Manohar’s stand, is he still a votary of “standard” pitches?

The captains and curators have no clue when the elements intervene as they have in Bengaluru where it has been raining thanks to the north-east monsoon and the Test, starting Saturday, is likely to be played under grey skies. Now the match has become a lottery and the toss may have a larger say in its outcome.
[dropcap color=”#008040″ boxed=”yes” boxed_radius=”8px” class=”” id=””]S[/dropcap]outh Africa’s One-Day International (ODI) captain AB de Villiers knows about the conditions in Bengaluru as much as the Indian captain since he plays for Royal Challengers Bangalore under Kohli’s captaincy. In any case, overcast conditions should help their pacers, now that pacer Morne Morkel is also fit to share the new ball as Dale Steyn and Vernon Philander have both been ruled out.
The subject of pitches got magnified after the spat between Indian team director Ravi Shastri and Mumbai’s Wankhede Stadium curator Sudhir Naik over the flat track for the series deciding match in the ODI series.
What must have irked the team management was despite clear instructions to all the staging associations that the pitched should be turners and the grass should be seen only in the outfield, the Wankhede curator failed to provide one to their liking.
[dropcap color=”#008040″ boxed=”yes” boxed_radius=”8px” class=”” id=””]I[/dropcap]t would be interesting to know Manohar’s stand, is he still a votary of “standard” pitches? To be fair to Manohar, he has initiated sweeping changes in the functioning of the board. In his second innings, he made the second Annual General Meeting (AGM) of the year more meaningful.
Though the board may have appointed an ombudsman, in a highly respected former chief justice of Delhi High Court, Justice Ajit Prakash Shah, to see if any of the board’s activity or the official violated the ethics of the board, the operational part has left much to be desired. If all complaints have to be vetted by the board, there is fear of picking and choosing the harmless ones. In such a situation, the board will be briefing the Ombudsman.
Some senior board members feel the ombudsman might hamper the board’s functioning and so a fool-proof in-house mechanism would have done the job. The feeling is if the board goes strictly by the book, there will be no issues to refer to the ombudsman. Going by the past experience, they fear, these legal appointments may not serve the purpose.
There is no clarity on the issue of conflict of interest. Removing Narayanswami Srinivasan by his once buddy Manohar may send out a message to cricket world and also Justice Rajendra Mal Lodha Committee that the board has started a serious clean-up programme, but that may not be enough.
[dropcap color=”#008040″ boxed=”yes” boxed_radius=”8px” class=”” id=””]A[/dropcap]lso, removing Shastri from the Indian Premier League (IPL) Governing Council or dropping Roger Binny from the selection committee because his son is an India player are small steps in that direction. For that matter, dumping Anil Kumble as chairman technical committee is no big deal. The board chief says the work is still in progress, knowing well that states will have to do much more to address the issue.
Manohar is right – the board has to address perception of conflict of interest. Can we know how many officials/ players/ players’ agents/ event managers have got back to the board informing it of their conflict of interest? That’s a bigger story and how Manohar deals with it will be watched keenly. 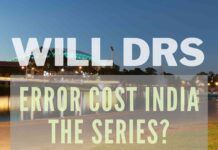