You may find snow in the backdrop captivating and enchanting but our situation is miserable. Neither the media highlight our problems nor the officers or leaders (politicians) pay any heed to our grievances.

Identified as Tej Bahadur Yadav of of 29 Battalion, the BSF jawan posted series of videos on his Facebook page exposing the senior administrative officers and others of according step motherly treatment to them in terms of providing sub standard ration supplies and not addressing their grievances to their satisfaction.

Feeling dejected and let down by the senior officers the BSF jawan is all praise for the successive governments who he claimed were providing all possible assistance and ration supplies to the jawans but it is their senior officers who were robbing them of their due share and selling the same stocks in the open market.

In his video posts, Tej Bahadur Yadav is heard saying, “You may find snow in the backdrop captivating and enchanting but our situation is miserable. Neither the media highlight our problems nor the officers or leaders (politicians) pay any heed to our grievances.”

[dropcap color=”#008040″ boxed=”yes” boxed_radius=”8px” class=”” id=””]N[/dropcap]arrating his ordeal he narrates,“After 10-11 hours of backbreaking duty from early morning to late in the evening, irrespective of rain, snow or storm, all a jawan gets to eat is this kind of food… How does one survive on it. The dal has only water with turmeric powder and salt… and nothing else.. no garlic or onion. For the past 10 days we are being served only this along with chapatis (which looked poorly baked),” he rued, showing his tiffin. And he asks in the same breath, “now, you tell me, can a jawan perform a 10-hour duty after having such meals?”

At times jawans have to sleep on empty stomach.

He complains that a jawan gets only one parantha and a cup of tea in the morning without any vegetable or even pickles.

His ire appears directed at his senior officers. “The Government provides us with all the facilities and the required supplies. But everything gets usurped by the senior officers. And a soldier gets nothing.” Even worse, he goes on to claim, “At times jawans have to sleep on empty stomach.”

There is a video which is shot inside a dark and dingy kitchen, the cook is heard saying: “this is all (cooking material) I’ve….” Also, he is overheard hurling abuses on senior officers (over their purported apathetic attitude) while baking chapattis.

On being asked by the same jawan to start the gen set for electricity, the reply is not audible due to poor quality of the clip.

[dropcap color=”#008040″ boxed=”yes” boxed_radius=”8px” class=”” id=””]W[/dropcap]hen contacted, Dharmendra Parikh, BSF DIG Jammu frontier said, “He (Tej Bahadur Yadav) has a bad service record. In the past four years, he was never assigned any duty with a weapon in any forward area. It was for the first time that he was stationed as sentry near the administrative block recently—and now he has made up this story. He was about to be dismissed from service for dereliction of duty but was spared due to leniency shown by higher authorities.”

The DIG went on to add, “Even if he had genuine grievances he could have gone to the Vigilance section of the BSF or the Army stationed nearby. Or for that matter he could have spoken to the DIG, who had been to the battalion headquarter three days ago.”

Asked about the Jawan’s specific complaints, the DIG had this to say, “The quality and quantity of the food-rations provided to BSF jawans and Army are the same. In fact, battalions stationed on higher altitude areas, get surplus supply of all essentials. I’ve never received any complaint regarding shortage of food-ration supplies or denial of facilities from any battalion stationed in any of the three regions of the state (Jammu, Kashmir Valley and Ladakh).”

Border Security Force is entrusted with the responsibilities of Border Management and Border Guarding with Indo-Pak border on western theater on IB of Jammu to Gujrat independently and on LC area of Jammu and Kashmir under Army Operations Control. Mentioned BSF Constable who has uploaded his selfie declarations on his Facebook page is posted in a Battalion deployed on LC. In comparison to International Border deployment, serving conditions are harsh as weather and counterpart both poses difficult challenges. However ration is authorise to all incl Officers at LC and available in good quality, quantity and in variety.

Constable Tej Bahadur as an individual has a difficult past. From initial days of his career, he needed regular counseling. Different correction mechanics have been applied for the individual’s welfare as he was habitual offender of absenteeism without permission, chronic alcoholism, misbehaving and using force with superior officers and certain other acts against good order and discipline. For such reasons, individual has served mostly in headquarters under supervision of some dedicated superior officer. In spite of him being a bad hat, proper time has been devoted for individuals improvement as a welfare to the individual.

He has been sent only ten days back to the place of deployment i.e. Adm Base on road head to facilitate support to high altitude forward locations which he shown in current selfie, on experimental basis to observe the improvements of past counseling. DIG and Commanding Officer visited him and other BSF Jawans present in strength of appx 20 in last one week and there was no complaint from anyone.

Leaving apart the background of individual, to enquire in transparent and fair manner into the circumstances which the individual alleged in posted videos, a DIG rank officer has reached the location. Investigation will reveal the facts soon. 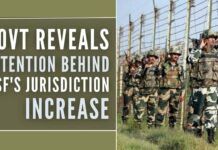 BSF clarifies that it has no powers to register FIRs, rebuts TMC MLA’s allegation as ‘Utterly Baseless’

Crimson is the soil of Kannur – crimson with the blood...