Pointing out “errors” and “non-consideration of facts”, the Central Bureau of Investigation (CBI) on Friday filed a Review Petition against the bail granted by Supreme Court’s Justice R Banumathi-headed Bench. The CBI’s Review Petition said that the bail order granted to the former Finance Minister Palaniappan Chidambaram on October 22 did not consider the statement of witnesses recorded regarding the attempts of Chidambaram to silence them. In the Order, the Justice Banumathi-headed Bench said that there are no details as to the form of the approach of those two witnesses – either SMS (Simple Messaging Service), e-mail, letter or telephonic calls and the persons who have approached the material witnesses.

The Order also blamed the CBI saying that there is no evidence that Chidambaram tried to influence two material witnesses in the case. The Order passed by the Justice R Banumathi-headed Bench said that no details are available as to “when, where and how those witnesses were approached”. The CBI’s Review Petition challenges this stand of the Court and clarifies that the agency has given the legally recorded statements of the two witnesses.

“In the order of dismissal some errors apparent on record have crept in, which if considered, would have a material change in the outcome of the SLP (Special Leave Petition),” said the review petition filed through advocate Rajat Nair. The CBI said the review petition has been filed as the findings rendered in the October 22 verdict are contrary to the record, which is required to be corrected and suitable order is required to be passed.

“It is submitted that the finding recorded by the High Court was on record of the SLP which has completely escaped the attention of this Court though specifically invited on behalf of the CBI during the course of the hearing. This has resulted in an error apparent on the face of the record resulting in a serious miscarriage of justice. This Court, being the Court of record should clarify this position and review its order,” the CBI’s review plea said.

The CBI said the finding rendered by this Court is clearly contrary to the record and amounts to an error apparent on the face of the record.

The probe agency said that as pointed there are “cogent and credible evidence” in form of witness statements under section 161 and 164 of CrPC (Criminal Procedure Code), which clearly records that the SLP petitioner (P Chidambaram) has attempted earlier and is trying to influence the said witnesses and pressurize them into not deposing them against the SLP Petitioner and his son (Karti Chidambaram).

“It is submitted that in absence of this court perusing the statements available with the investigating agency, the said findings could not have been rendered by this court to hold that the allegation is a mere averment without any basis,” the review plea said.

“It is stated that the said allegation was not a mere averment of the investigating agency, but was based on the cogent material available with it and as such could not have been rebutted without even perusing the material available on record. In view of this ground alone, the judgment rendered by this Court is liable to be reviewed,” it added.

The CBI said the finding rendered by this Court is clearly contrary to the record and amounts to an error apparent on the face of the record. The probe agency also requested the top court to accord hearing while adjudicating the review plea. 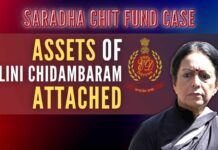 Managing Mankind – Are we headed for another World War? Part...