Last Friday, Murphy called for Indian officials to rescind their Citizenship Amendment Act (CAA) that grants asylum to the victims of religious persecution. Singh’s scathing response exposing Murphy’s hypocrisy comes on the heels of a new report that revealed Iranian Major General Qasem Soleimani had allegedly planned to attack the capital of New Delhi prior to being killed in a drone strike ordered by President Trump.

Singh, a 34-year-old Indian American, has made waves with his conservative Republican platform. An Atlantic City native, Singh is one of Governor Murphy’s most prominent and vocal critics.

“This is nothing more than a smear job targeting one of America’s greatest allies,” said Singh. “[Governor Murphy has] been waiting for his chance to attack the peaceful nation of India ever since their Prime Minister openly expressed support for President Trump.”

In September, Indian PM Narendra Modi appeared with President Trump at a rally in Texas, where he declared to over 50,000 supporters that Trump “has made America great again!”

“That’s what this is really about,” Singh continued. “Right out of the Democrat playbook. They can’t stand it when anyone has something good to say about our President. They blast President Trump for securing our borders, calling him a bigot. Now, [Murphy] is getting back at India simply for making their country safer for their citizens.

“This is about peace and sovereignty in our nations. If [Murphy] really cared like he claims, he’d start by fixing the problems we’ve got right here in New Jersey. Instead, he chooses to throw out empty platitudes and attacks one of the freest nations on Earth.”

In 2019 alone, India was hit by at least six separate terror attacks, claiming 78 lives. Over the past two decades, nearly 200 terror groups have been found operating in the world’s second-most populous nation. The new measure was first presented to the lower house on December 9th, where it was overwhelmingly approved in a 311 to 80 vote.

“Phil Murphy wants to pretend like this has always been his position,” says Singh. “The reality is nothing more than disingenuous pandering. He’s never taken issue with similar policies from the U.S. or the U.N. or the E.U. In fact, in the past, even Phil Murphy has advocated policies that use a religion test and exclude Muslims from Indonesia while admitting their victims into New Jersey as refugees.”

“To put India on the same level as truly oppressive regimes is nothing short of hypocrisy of the highest order.” 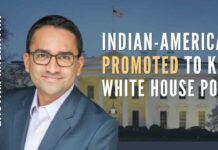