Listen this on the go on our podcast 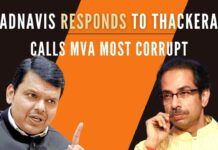 Fadnavis responds to Thackeray’s address on the occasion of Dussehra: Calls MVA most corrupt

People’s love and affection make me feel that I am still the CM says Devendra Fadnavis: Clears the air around his statement With Rs.750 crores undisclosed income from his close aides, Yediyurappa in a thick soup?

PGurus Newsdesk - October 16, 2021 0
Researchers demonstrate that Facebook’s ads technologies may target specific individual According to the paper written by a team of academics and computer scientists from Spain...

Fadnavis responds to Thackeray’s address on the occasion of Dussehra: Calls...

Will the Taliban overrun Afghanistan again once the US exit? Prof...

Satish K Sharma on the upcoming UK polls and why the...