Protests erupt in various parts of UP, and Delhi over comment on the Prophet

After BJP suspended Nupur Sharma for reading out part of Hadith on a TV debate several days ago, incidents of violence and slogan-shouting were reported from Uttar Pradesh’s Prayagraj, Saharanpur, and other parts. Protests broke out on the premises of Delhi’s Jama Masjid over remarks on Prophet Mohammad.

Trouble began in Atala in Prayagraj after the prayers when protesters started shouting slogans. The police tried to prevent the protesters from moving in different directions. However, some of the protesters pelted stones at the police that retaliated with tear gas shells.

In Saharanpur, protesters shouted slogans seeking action against the former BJP spokespersons. Similar scenes were reported from Moradabad and Lucknow. In Lucknow, thousands of protesters at the Tile Wali Masjid were prevented by the police from crossing the barricades.

Additional Director General (Law and order) Prashant Kumar said the situation adequate forces had been deployed to ensure peace. He said that the situation was being closely monitored and authorities were keeping a close vigil on social media too.

In Delhi, the people from the Muslim community gathered on the stairs, just outside the Jama Masjid, holding placards against the former BJP spokespersons Nupur Sharma and Naveen Jindal. 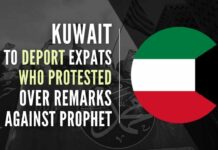