[dropcap color=”#008040″ boxed=”yes” boxed_radius=”10px”
class=”” id=””]N[/dropcap]ew Delhi/Mumbai, Dec 14 – A day after the bodies of Mumbai artist Hema Upadhyay and her lawyer, Harish Bhambani were found in a drain in Mumbai, the artist community in the national capital were shocked and grieved at the sudden tragedy.

That something that started in art and love has come to this is very sad. Even the speculation about this is very tough. Knowing Chintan it is very difficult to imagine that he could be named in something like this. – Myna Mukherjee

For artist Mithu Sen, the news is yet to sink in. “We were good friends and I met her in Dubai last month for a show. She was extremely happy that her exhibition was coming up in the US next year,” Sen said.

Describing her as a promising artist, Sen said that Upadhyay’s installation work ‘Space between you and me’ was an impressive one. “It was a wonderful work and she showed it in Mysore in 1998. She exhibited it again in Paris in 2010,” Sen reminisced. “She was also a bubbly and down-to-earth person with no airs. She used to have strong opinion about politics and social issues,” Sen added.

Four suspects in the sensational double-murder have been detained by Uttar Pradesh Police and their Mumbai counterparts, official sources said on Monday.

[dropcap color=”#008040″ boxed=”yes” boxed_radius=”8px”
class=”” id=””]H[/dropcap]ema, 43, and her estranged husband, Chintan, have been regulars in Delhi art circles and news of their acrimonious divorce is common knowledge as both spoke openly about their problems. Chintan was questioned on Sunday and later allowed to go.

Curator and gallerist, Engendered, Myna Mukherjee said: “That something that started in art and love has come to this is very sad. Even the speculation about this is very tough. Knowing Chintan it is very difficult to imagine that he could be named in something like this.”

Mukherjee had featured Chintan in his last group show in Delhi.

Friends of the estranged couple said the two were college sweethearts and attended the same art school in MS University in Baroda. After their marriage broke down, Chintan moved out of their shared Juhu-Tara Road flat and moved to Delhi even as Hema stayed on in Mumbai.

[dropcap color=”#008040″ boxed=”yes” boxed_radius=”8px”
class=”” id=””]F[/dropcap]or artist Gigi Scaria, Upadhyay’s death is a loss to the art world. Describing her as a good friend and as an interesting contemporary artist, he said that the incident sent shockwaves across the artist community. “It is disturbing that one of us had to meet with such an unfortunate death,” said Scaria, who met the artist for his solo exhibition in Mumbai last month.

“I met her at my solo exhibition and we had dinner together. It’s unbelievable,” added Scaria.

Echoing similar sentiments, artist Atul Bhalla said that he was yet to recover from the news. Bhalla had shared exhibition space with Upadhyay’s at the Vadehra Art Gallery recently for an exhibition .

“She was extremely hard-working and had great potential. Her works were shown in some Biennials,” said Bhalla, adding that he was friends with Chintan too. “However, she had never discussed any personal issues with me,” he said.

The artists also said that they were planning a condolence meeting in the capital though it’s too early to hold that. 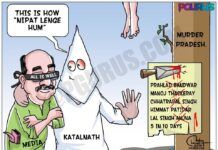 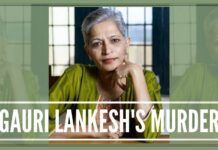 Bengaluru Illegal Cow Slaughter – All that you need to know