Governors of at least 30 of the 50 US states, all but one of them Republicans, including Louisiana’s Indian-American governor Bobby Jindal have demanded a halt to resettlement of Syrian refugees until security concerns can be addressed.

Even as he announced his withdrawal from the US presidential race Tuesday Jindal, who on Monday issued an executive order banning Syrian refugees from Louisiana said: “We don’t want these refugees in our state”.

[dropcap color=”#008040″ boxed=”yes” boxed_radius=”8px” class=”” id=””]T[/dropcap]he governor said he has ordered Louisiana State Police to track the 13 Syrian refugees that have been sent to his state so far by the federal government.

“Why would we let people in the country when ISIS has told us they are going to send terrorists with these refugees?” he said. Jindal also repeated his theme that “immigration without assimilation is invasion”.

On Monday, the State Department said it would not change its plan to accept 10,000 Syrian refugees in the next year. States do not have the authority to refuse entry to migrants because resettlement is federally funded.

Many Democratic governors continue to support the refugee plan. New Hampshire’s Maggie Hassan is the lone Democrat opposed to the Syrian refugees.

The White House on Tuesday hosted a call with a bipartisan group of 34 governors to provide information about existing refugee admissions policies and security screening measures.

[dropcap color=”#008040″ boxed=”yes” boxed_radius=”8px” class=”” id=””]W[/dropcap]hite House Chief of Staff Denis McDonough and other officials briefed the governors on the rigorous screening and security vetting process that is required before a refugee is able to travel to the United States.

According to a White House statement, the Administration officials reiterated what President Barack Obama “has made abundantly clear: that his top priority is the safety of the American people.”

“That’s why, even as the United States accepts more refugees-including Syrians-we do so only after they undergo the most rigorous screening and security vetting of any category of traveler to the United States,” it said.

“It incorrectly blames the victims of terrorist violence for their own plight and falsely suggests that welcoming Syrian refugees would put the people of Louisiana at risk,” Executive Director Marjorie Esman said.

[dropcap color=”#008040″ boxed=”yes” boxed_radius=”8px” class=”” id=””]T[/dropcap]”he order also violates United States law, the Louisiana Constitution, as well as the values on which our country was founded: It is unconstitutional to bar an entire group of people entry to Louisiana based on their race, religion or nationality,” he said. 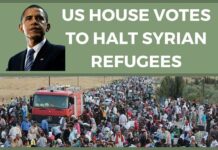 Pakistan says no to NIA team visit re: Pathankot attack