The fall of the Indian tycoon and the Middle East-based businessman Bavaguthu Raghuram Shetty is so pathetic that his flagship company, the debt-ridden UAE Exchange was sold for just One Dollar to an Israel based consortium. BR Shetty (78) who landed in 1973 in Dubai as a medical representative started his boom by establishing the National Medical Centre (NMC) chain of hospitals and money exchange business. He was ranked 42nd in Forbes 100 richest men in the world in 2014. For the past two years, UAE-based banks were behind him for non-repayment of huge dues and it ended with selling his prime firm UAE Exchange for just One Dollar with buyer taking over the entire dues[1].

Before landing in the UAE, BR Shetty, at a very young age was actively involved in Jan Sangh politics and was Vice Chairman at his hometown Udupi Municipality. With his education in the pharmaceutical sector, he landed in the United Arab Emirates (UAE) as a medical representative. The rest is history. In no time he became a billionaire in the early 80s and establishment of UAE Exchange, a major money exchange firm aiming to transfer millions for working Indians to send money to their homeland. It is a well-known secret that his partners in the business were from the UAE Royal Families. Otherwise, it is impossible to become so prosperous in the Middle East.

There is still no clear explanation on what led to the falling of BR Shetty until the CIA declassifies its operations after two decades.

In 2012, Shetty’s health company NMC was listed in the London Stock Exchange and is now under insolvency settlements from 2019. In April 2020, the Central Bank of UAE has ordered the seizure of BR Shetty’s properties, and the billionaire and his family recently faced all kinds of embarrassment at airports in the Middle East. He is also facing insolvency cases in London too. For the past four decades, BR Shetty was a star in India by sponsoring so many cultural programmes and producing so many films.

Shetty owned the 100th and 140th floors of Dubai’s tallest tower Burj Khalifa. The 78-year-old entrepreneur was a high-flier, acquiring one asset after another till 2018. What led to his sudden downfall is still a mystery. One answer is that these partnerships of BR Shetty or any other non-national businessman in the Middle East are backed by Royal Families and powerful people in the kingdoms of the Middle East. The talk of the town is that some of these High Net-worth Individuals (HNI)s who were hidden partners withdrew their investment or lost trust. Some others say, such royal partners were not in the good books of the current administration or not in the good books of the United States, which looks for the elimination of money laundering activities with their non-friendly countries. There is still no clear explanation on what led to the falling of BR Shetty until CIA declassifies its operations after two decades. 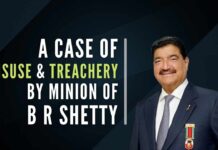 Travesty of injustice melted out to the modern czar of Dubai, B R Shetty