In Part 1 of our discussion earlier in the day, we saw that SGFX Financials Limited was incorporated on 13th December 2010 as operating at 145-147, St John Street, London, EC1V 4PW. The Company secretary was Mrs Shahanaz Ashraf Bharade and Directors were Mr.Sarvesh Narendra Gade, an Indian Businessman [Born 1985], Mrs. Shahanaz Ashraf Bharade [Born 1975] with Indian Nationality and Sharadchandra Govindrao Pawar [born 1940] Indian – Minister Govt of India. The address listed (145-147, St John Street, London, EC1V 4PW) is on all sorts of scam alert lists. As on date, “there are 32406 companies registered at 145-157 ST JOHN STREET, LONDON, ENGLAND, EC1V 4PW in Islington. 24254 companies are active, 8144 companies are dissolved and 8 companies are in liquidation”.

The paid up capital of the company was 700775 British Pounds (GBP) with 500 shares, with Sarvesh Gade holding 375 shares at GBP 1401.55 per share and Shahanaz Bharde holding 125 shares at 1401.55 GBP per share.
It is important to note that during December 2010 Sharad Pawar was Cabinet Minister in Manmohan Singh cabinet as Minister of Agriculture. He was also the President of International Cricket Council from India.
Did he inform the then Finance Minister and more importantly the Prime Minister Manmohan Singh about his floating a company in London with a paid up capital of GBP 7 lakhs?
The intriguing question is why he resigned within 23 days [05-01-2011] of floating this Company and why an Israeli by the name Jitu Jeremiah was appointed as Director and who resigned in a few weeks and again re-appointed etc.
Interestingly the company increased its share capital to 70 Bn GBP—Yes Billion—all paid by cash on 29-06-2011- one lakh times its original paid up capital of GBP 0.7 million. The number of shares shot up to 50 million from 500.

SGFX Application on 2011 to Enhance the Value to 70B Pounds

Where dif this huge amount of money come from? Is it related to Agriculture or Indian Premier League (IPL)?
If a company floated by a Cabinet Minister of India could be having a share capital of GBP 70bn you can imagine the power and prosperity of the entire cabinet!!
At ₹77 for 1 GBP [as of 30-09-2011], the amount comes to ₹5390 Billion which is ₹5,39,000 Crores. Such amount of richness is unheard of in the annals of global history – leave alone Indian history. The amount of money India collects from Personal Income tax is ₹400000 crores! Bringing this money alone would allow the entire long suffering middle class of India to go tax free for a whole year!
The most interesting part of this scam is the company getting dissolved on 27-11-2012 nearly 18 months after the arrival of such huge amounts. Whether the money was distributed or was it invested in ranches in USA and Australia are speculations at this point of time.
But the onus is on Pawar to explain to the nation at large and to Parliament about this ₹5,39,000 Crores accumulated by his company in London.
Will it be answered or met only with silence due to “Coalition Dharma” in Indian politics? Will the Mainstream Media (MSM) take up this monumental richness of a humble farmer from Baramati? 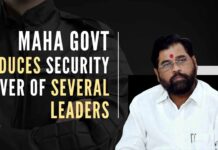