The absconding Tablighi sect Chief Maulana Saad Kandhlawi’s posh lifestyle stands exposed, while he preaches his followers to lead a simple life and stay as much as possible in a mosque. Photos of his palatial farmhouse with a swimming pool and posh vehicles are now out in the public domain. The controversial Maulana Saad (54) is known for his plush lifestyle, never mind what he preaches his followers (perhaps his sermons come with a present-company-excluded clause). His huge farmhouse is in Kandhla town in Shamili District in western Uttar Pradesh. Several neighbors of his farmhouse shared with PGurus his huge farmhouse photos and vehicles and a larger-than-life style of living.


Maulana Saad’s audiotape of the speech at the Markaz is now out in public domain. He was telling the congregation of 1000s of Tablighi preachers that Corona is a conspiracy to close down the Masjids and everyone must come to Masjids five times a day, regardless of the lockdown rules imposed by the Government. He told them, even if one were to die at a Masjid, consider it as a better option. After Delhi Police registered the case, Maulavi Saad is absconding. Now he tells Delhi Police that he will join later as he is following self-quarantine.

Maulana Saad Kandhlawi is the great-grandson of the founder of Tablighi Jamaat. The controversial organization is getting huge money from abroad from various countries, say many Intelligence Bureau officials. At present, the Government of India has decided to blacklist 960 foreign Tablighi preachers that landed at the Nizamuddin International headquarters for the Markaz.

A majority of the foreign preachers blacklisted are from Indonesia. As many as 379 persons are blacklisted from Indonesia, followed by Bangladesh (110), Kyrgyzstan (77), Malaysia (75), Thailand (65), Myanmar (63, Sri Lanka (33), Iran (24), Kazakhstan (14) and Philippines (10) Even six people are from China in the blacklisted category. These Tablighi preachers violated visa norms by landing on a Tourist Visa when they were supposed to have come through the Missionary Visa route. The Bureau of Immigration is checking the records of more than 3000 foreign Tablighi preachers. The blacklisted persons who are currently in quarantine will be deported and would be permanently banned from entering India. The county-wise list is published at the end of this article.

The Tablighi movement was started in India in the late 18th century in Mewat in India. This orthodox sect of Sunnis concentrated on teaching people about the Quran and religious conversion. They travel to hinterlands and rural areas for their mission. There were reported activities of their links with the terrorist organization Al Qaida and some of the members were even taken to Guantanamo Bay by the United States forces.

Former Intelligence Bureau chief Asif Ibrahim wrote an article on the nature of the working of Tablighi Jamaat. The former IB Director wrote: “The arrogance comes to the Tabligh men from the belief that they are doing God’s work, and God is their refuge. Care and caution, the advice of medical practitioner, a directive of the Government – go hell. The situation reminds me of the Bible…..”[1].

Nearly 22,000 Tablighi Jamaat members and their contacts have been quarantined across the country so far, a Union Home Ministry official said on Saturday. During the daily briefing, Punya Salila Srivastava, a joint secretary in the Union Home Ministry, told reporters that the Union government undertook “massive efforts” in coordination with states to trace the Jamaat members and their contacts to contain the spread of COVID-19.

At least 30 percent of India’s 2902 coronavirus cases can be linked to members of an Islamic group congregating in Delhi in mid-March, said the Government on Saturday. Lav Aggarwal, joint secretary in the Health Ministry, said at the same press conference that 1,023 coronavirus cases in 17 states were related to the Jamaat’s congregation. “Around 30 percent of the total cases are related to the religious congregation so far. We need to understand that we are as strong as the weakest link,” he said.

Mukhtar Abbas Naqvi, Union Minister for Minority Affairs, last week called the Jamaat’s congregation a “Taliban crime”. “When the entire country is together to fight coronavirus, in such circumstances, such a thing is a crime. Not just the law, but even the Almighty will not forgive such a thing. It is very unfortunate that the lives of so many people were endangered because of such a careless approach,” he said.

A First Information Report (FIR) was also lodged against Maulana Saad and six others for holding a religious congregation in Delhi allegedly in violation of the lockdown orders and not maintaining social distancing to contain the spread of Covid-19, officials said on Thursday. In a nine-page response to the notice, Maulana Saad, who is absconding, expressed his inability to respond to the questions asked by police as has self-quarantined. He said that since the Nizamuddin Markaz is closed, he will respond to the questions when it is opened again.

The country-wise list of 960 blacklisted Tablighi Jama-at preachers is published below: 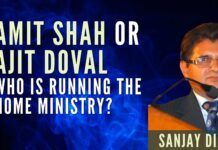 Who is running the Home Ministry – Amit Shah or Ajit Doval? Sanjay Dixit unravels the mystery