It is astonishing that a public sector company, LIC, is being forced to bail out a private company

Life Insurance Corporation of India (LIC) seems to have become the saviour of sick entities. After acquiring the bleeding IDBI Bank, it is about to take over Infrastructure Leasing & Financial Services (IL&FS), an unlisted infrastructure body owning dozens of subsidiaries. LIC and its owner, the government, have made a monkey of all rules, norms, and propriety. Worse, nobody is bothered.

LIC recently shelled out Rs 13,000 crore to buy 51 per cent stake in IDBI. It was extremely objectionable on the part of the government to allow the insurer it owns to make such a questionable investment. And what, pray, the regulators were doing? They behaved like the lapdogs rather than watchdogs. The Insurance Regulatory & Development Authority of India (IRDAI) okayed the acquisition without much fuss. The banking sector regulator, the Reserve Bank of India, too followed suit.

Then there is something that has been touted as the ‘super-regulator’—the Financial Stability & Development Council (FSDC). Constituted in December 2010, it is chaired by the Finance Minister and its members include, among others, the RBI Governor, Securities & Exchange Board of India (Sebi) Chairman, the IRDAI Chairman, and the Pension Fund Regulatory and Development Authority Chairman.

The FSDC, according to an official website, “deals with issues relating to financial stability, financial sector development, inter-regulatory coordination, financial literacy, financial inclusion and macro-prudential supervision of the economy including the functioning of large financial conglomerates.”

By the way, the FSDC was expanded in May in terms of members; it now also includes the Chairman of the Bankruptcy Board, the Department of Information Technology Secretary, and the Revenue Secretary. But in terms of action? Well, it is missing in action. The acquisition of IDBI Bank by LIC didn’t even makeup to its agenda. In short, the FSDC is becoming bigger—to do nothing.

One wonders what kind of ‘super-regulator’ the FSDC is. But, in a way, it is hardly surprising: a regulator, super or otherwise, headed by a minister is an anomaly; it’s like a vegetarian steak.

And now this IL&FS purchase by LIC. The IDBI Bank at least is a public sector bank, but IL&FS is a private entity. It is astonishing that a public sector company, LIC, is being forced to bail out a private company.

“Will LIC now bail out what is essentially a private entity (with some public sector shareholding), which has been allowed to grow into gigantic proportions without any oversight by a single sector regulator, the Comptroller and Auditor General (CAG) or Central Vigilance Commission?” Moneylife managing editor Sucheta Dalal wrote on July 24. The proposed bailout “means LIC will have to invest over Rs 1,000 crore in line with its equity holding. The Central Bank of India, which itself is under Prompt Corrective Action by the Reserve Bank of India (RBI), will also have to invest or IL&FS will need to find another investor to take its share.”

LIC managing director Hemant Bhargava recently became IL&FS chairman. The insurer will have to invest more in the infrastructure company. The IL&FS board has reportedly cleared a Rs 4,500 crore rights issue, which would translate into Rs 1,000-crore investment by LIC.

Imagine the incongruity of loss-making public sector Central Bank of India and SBI shelling out money to rescue a private company. Could there be a more brazen instance of private profits and public losses? 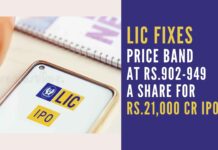 Woman banker against establishment: The Story of one woman’s fight for justice

Anatomy of a crime P4 – Who benefited from the HFT...