First major strike on BJP leader after Abrogation of Article 370

His father and brother, present in the shop, located steps away from the Bandipora police station, were also shot dead by the terrorists without facing any resistance from the set of 10 PSO’s deployed to protect the youth leader.

According to the social media profile of the BJP leader, he was actively involved in party activities and was very popular among the local residents.

According to official sources, following the major security lapse, all the PSO’s deployed on security duty were detained by the police and a massive manhunt was launched in the area to track down the footprints of the terrorists behind the targeted killing of a BJP leader.

Jammu and Kashmir police in a tweet said, “terrorists fired upon BJP worker Wasim Bari at Bandipora. During indiscriminate firing Wasim Bari, his father Bashir Ahmad and his brother Umer Bashir got injured and shifted to hospital but unfortunately, all the three succumbed to their injuries”.

Post abrogation of Article 370 and reorganisation of the erstwhile state of Jammu and Kashmir, this is one of the biggest terror strikes on political leaders, especially of the ruling party in Kashmir valley.

The attack was executed, exactly a month after the killing of a Kashmiri pandit sarpanch Ajay Bharti on June 8.

According to the social media profile of the BJP leader, he was actively involved in party activities and was very popular among the local residents. He was working hard on ground zero along with his supporters to build a party network in the region. He had close contacts with several central party leaders and was known in the party circles in Kashmir valley as an active worker.

Paying glowing tributes to him, state BJP chief Ravinder Raina said, “My friend, BJP’s Tiger in Kashmir Valley Sheikh Wasim Bari, his brother Umer Sultan and father Bashir Ahmad sacrificed their lives for our Nation. They lived like Tigers, they were the soldiers of Bharat Mata, Coward Pakistani’s killed them in Bandipora”.

BJP’s National General Secretary, Ram Madhav posted a tweet condemning the attack on the BJP leader. He wrote, “Shocked and saddened by the killing of young BJP leader Wasim Bari and his brother by terrorists in Bandipora. Bari’s father who is also a senior leader was injured. This despite 8 security commandos. Condolences to the family”.

Twitter handle of Peoples Democratic party issued a statement which said, “Distraught at the recurring spate of killing of political workers in Kashmir. While we express our unconditional sympathies with the family the administration has squarely failed in ensuring adequate security arrangements amid deteriorating security conditions”.

Former Chief Minister and National Conference Vice President Omar Abdullah also tweeted, “Sorry to hear about the murderous terror attack on the BJP functionaries & their father in Bandipore earlier this evening. I condemn the attack. My condolences to their families in this time of grief. Sadly the violent targeting of mainstream political workers continues unabated”.

Jammu and Kashmir Apni Party (JKAP) President Syed Mohammad Altaf Bukhari said that “such incidents are downright appalling and disturbing, we strongly condemn these brutal killings and our heart goes out to their family in this hour of grief.” 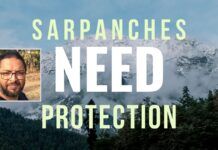 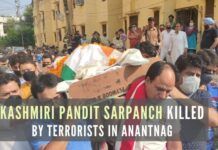