No takers for Pakistan’s pitiful laments

Media reports suggest that the dossier has not gained any traction [1]. Rightfully, it has been dismissed by the diplomatic as well as intelligence communities as the handiwork of a dilettante deep state of Pakistan.

The antic – of production and sharing of the document – itself is a non-event and by no means a surprising or something the Indian establishment should fret about. The international media, particularly the western media has forthrightly rejected it, going by the conspicuous absence of coverage.

The fact remains that under Prime Minister Narendra Modi, India is no longer a soft state that will squirm at every pinprick from its adversaries.

However, the dossier drama does bring to the fore some deeper issues that deserve to be highlighted. Many analysts have repeatedly noted that the Indian foreign policy and national security domains have undergone a sea change in recent years, definitely so in the last six years or so.

Pakistan may not have fully grasped this new ground reality in all its dimensions. As far as India is concerned, Pakistan’s infamous strategy of death by a thousand cuts was consigned to flames the day India embarked on its surgical strike inside Pakistan[2].

The fact remains that under Prime Minister Narendra Modi, India is no longer a soft state that will squirm at every pinprick from its adversaries. Thus it is no empty talk when the Defense Minister Rajnath Singh declared this recently[3]. There is overwhelming data to support this assertion.

Given the transformations in the management of national security, and the new normal India has created for itself, it is no surprise that the dossier drama fell flat on its face. Any amount of grandstanding or filibustering the UN à la Imran Khan would be futile.

The new paradigm appears to be built around defining and defending all dimensions of national security with unequivocal clarity while simultaneously devising credible deterrents to dissuade threats from inimical quarters. This includes imposing disproportionate costs, as evidenced by strikes inside Pakistan as well as offensive posturing and responding to border encroachments, specifically in India’s northern borders.

Its moribund economy together with deteriorating relationships in the Islamic world as well as political turmoil resulting in internal instability are concocting a deadly cocktail for implosion.

A few key outcomes emanating from this new security dispensation is worth highlighting.

Firstly, India’s successfully handling of the diplomatic fallout of the abrogation of Article 370 is a case in point. If there are no takers for Pakistan’s pitiful laments, credit is due to India’s foreign policy establishment for handling key powers and the international media with a new sense of purpose and determination.

Secondly, the ground situation in Kashmir has been a wake-up call, particularly for the western nations who have been sitting on the fence for several decades. The absence of street protests, particularly stone-throwing and other violent agitations has signaled the support of Kashmiri people for the abrogation. Clearly, this has denied Pakistan any room in tabling the issue anywhere.

Thirdly, Pakistan’s efforts to foment violence have been neutered by a new security architecture that has fostered better inter-agency coordination. The failure of terrorists to cross over into India even during the summer months when the snow has melted in high mountain passes like yesteryears as well as the absence of new local recruits are key successes to note.

Fourthly, the remarkable success of the security agencies in flushing out remnant rump elements of terror groups has been a big win against the proxy war. It is just a matter of time before Kashmir if officially declared terrorism free, much to the discomfiture of Pakistan.

Understandably, the prevailing peaceful security climate in Kashmir and for that matter elsewhere in the Indian republic has piqued the Pakistani establishment. This frustration has resulted in the dossier, which confronted a transformed Indian administration that ensured its dramatic defeat.

If the adversaries are sleepless about India’s NSA, so be it. It is the stated duty of the NSA to take appropriate measures deemed fit to protect the overall integrity of India’s security environment. To point a finger at an individual for its travails speaks volumes of Pakistan’s churlishness.

More importantly, Pakistan must understand that this is the new normal, where the punitive response to the commission of cross border terror will be in geometric proportions that could finally end up not only in regime change but also a drastic redefinition of its territory.

But the message for Pakistan is writ large and would be fatal for it to ignore. Its moribund economy together with deteriorating relationships in the Islamic world as well as political turmoil resulting in internal instability are concocting a deadly cocktail for implosion.

The specter of Pakistan splintering into smaller entities is too real now to be ignored in the new normal. The truth is that it will no longer be business as usual for its deep state, and its terminal ailment could hasten the end of an entity we know as Pakistan. All it will take is one more high visibility terror attack on India. 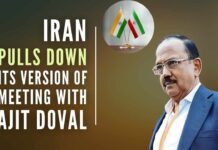