According to the Indian Council of Medical Research (ICMR), there will be an estimated 12 percent rise in cancer cases in India in the next five years.

The latest estimates suggest that cancer cases are on a rise and will continue to rise at a significantly higher rate. Once thought of as an old age disease, cancer is now a cause of concern also among the youth and children and middle-aged.

There’s no refuting it. The word ‘cancer’ has the potential to evoke a powerful form of fear and anxiety in just about anyone who hears it or reads it. This fear prevents people from being receptive to messages about cancer, leaving them unprepared for the disease.

National Cancer Awareness Day is observed every year on November 7 in India, to increase awareness about cancer prevention and the need for its early detection.

An increase in average life expectancy is one of the major contributors to the overall cancer incidence. As the body ages, it starts allowing faults to build up and accumulates more of these faults in the genes, considerably increasing the risk of cancer.

Males (52.4 percent) are more prone to the risk of all cancer cases compared to females (47.4 percent). Tobacco use is the major reason — comprising 48.7 percent of cancers among males and 16.5 percent among females.

The number of cancers due to tobacco consumption in 2025 would be 4,27,273 — contributing to 27.2 percent of India’s total projected cancer cases.

Tobacco is known to contain at least 69 cancer-causing agents which is a major contributory factor to the increased cases of cancers.

Murad E. Lala, Oncologist at P.D. Hinduja Hospital & MRC, Mahim, Mumbai, opined, “Tobacco cessation will reduce the cancer burden by about 25 percent. The major contributing factor being tobacco and ghutka consumption that directly accounts for 27 percent of cancers in India.”

“We all know that oral and lung cancer that affects our male population to the maximum can be prevented by curbing smoking and tobacco consumption. We need to start thinking of some unhealthy foods similar to what we think about tobacco — unnecessary, addictive, and harmful,” said Anil Heroor, Director-Advanced OncoSurgery Unit, Fortis Hospitals Mumbai.

Talking about the disease, Wesley M Jose, Clinical Associate Professor, Medical Oncology, Amrita Hospital, Kochi, said, “A larger proportion of older individuals is the first cause of increased cancer numbers. The higher the proportion of older age in the population, the higher is the chance of cancer.”

Apart from tobacco, alcohol, obesity, a sedentary lifestyle and environmental factors also contribute to the increase in cancers.

“The overall living circumstances of the Indian population have improved and that has also led to a larger sedentary workforce, which has access to a high-calorie diet. These factors indirectly have affected the rise in numbers,” Jose said.

“Nearly six types of cancers are linked to obesity and are slowly on the rise among people under 50. These are cancers of the colon or rectal, pancreas, kidney, gallbladder, uterine (also called endometrial cancer), and multiple myeloma. These cancers are often not discovered in younger people until the disease is advanced and harder to treat,” Heroor said.

Childhood cancer is also seeing an increasing trend, mainly of leukemia and lymphomas. Childhood (0-14 years) cancers constitute 7.9 percent of all cancers, according to ICMR.

“The common types of cancers in children are leukemias, lymphomas, CNS tumours, retinoblastoma, and Wilm’s tumours. While most childhood cancers are curable if detected early and treated appropriately, children in India have limited access to tertiary centers that treat childhood cancers. This delay in treatment causes the survival rate to drop,” Jose said.

The cancer burden in the country can be reduced by strengthening the government health systems, making universal health coverage, health education, treatment compliance, and early detection centers at the community level.

Besides, vaccination for virus-related cancer like liver and cervix, and improved physical activity, stricter tobacco and alcohol laws can also help. Scientific data not available to suggest Covid pills can be useful at the moment: ICMR 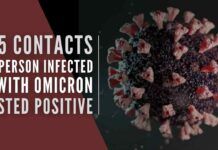