[dropcap color=”#008040″ boxed=”yes” boxed_radius=”8px” class=”” id=””]W[/dropcap]hatever be recorded in the State Assembly Secretary’s report on the subject to Governor Che Vidyasagar Rao, and whatever be the outcome of petitions filed with the State High Court and the Election Commission,  the popular perception is that the recent Tamil Nadu TN trust vote was a massive rape of the idea of democracy.

…M.K.Stalin, first and then the incumbent chief minister, O.Paneerselvam, to address the House. As communicated by the media, both these established leaders harped on the uniquely ugly situation created by “imprisoned” MLAs to justify their request for a secret ballot…

Yes, it was so right from the beginning to end; from the 100-odd MLAs being held hostage for two weeks in a hotel resort 30 kilometres from Chennai to the comfortable confirmation of Edapaddi K. Palaniswami as the chief minister, with the finale being provided by the forceful expulsion from the Assembly of the Leader of the Opposition and his 89 DMK party members. And the rough handling of the Assembly Speaker, the snatching of his microphone, the toppling of chairs, the tearing of papers and the muscle power exhibited on the occasion —all fuelled to convert the rape into a gang rape of democracy that’s perhaps unprecedented in our nation’s 70 years of independence.

The trust vote itself admittedly began decently when, after moving of the Motion of Confidence in the government of the newly sworn-in chief minister, the Assembly Speaker, P.Dhanapal, allowed the Opposition leader, M.K.Stalin, first and then the incumbent chief minister, O.Paneerselvam, to address the House. As communicated by the media, both these established leaders harped on the uniquely ugly situation created by “imprisoned” MLAs to justify their request for a secret ballot to decide the trust vote instead of the customary “Ayes” and “Nays” expressed on the Assembly floor.

[dropcap color=”#008040″ boxed=”yes” boxed_radius=”8px” class=”” id=””]I[/dropcap]n the absence of live TV coverage under the euphemistic disguise of “Technical problem”, the media present in the Assembly merely communicated that the Speaker decline the secret ballot  plea; no reasons for that decision were therefore available to those TV watchers glued to the event. Nor, astonishingly, were they made publicly available then or thereafter.

Just what was the reason for the Speaker’s crucial negative decision?

To end as a gang rape.

Just what was the reason for the Speaker’s crucial negative decision? No one, one recalls, has given even one till date, though an analyst or two simply mentioned the “Disqualification factor” of the MLAs without amplifying the issue.

A Google search did reveal an article which, in one paragraph, asserted against the legal validity of a secret ballot. It was published on 17 February, just one day before D-Day in the Tamil Nadu Assembly. It was authored by Sanjay Hegde, a senior advocate of the Supreme Court. Who frequently appears on TV debates of a famous English channel to bitterly oppose anything that has the semblance of supporting the BJP cause.

Below is what he wrote:

“The secret ballot that was suggested in recent days as part of the floor test would violate the anti-defection act. A floor test is not restricted to only members of the ruling party. There is a substantial minority party in the Tamil Nadu Assembly which can side even with the smaller faction of the ruling party in order to defeat the main faction. In this situation, a man invited to seek a vote of confidence could split his legislature party, without even achieving the necessary two-thirds strength.”

(http://www.thehindu.com/opinion/lead/Jugaad-jurisprudence-the-Tamil-Nadu-way/article17314028.ece)
The senior advocate did not go beyond what he wrote above. Either he was crippled by editorial limitations of space or he assumed that his readers were familiar with the Constitution of India’s Tenth Schedule which is more popularly dubbed as the Anti-Defection Law.

Although not a lawyer, but believing that that law is essentially a matter of commonsense, one would, with the utmost respect to the senior advocate concerned, contest his logic against secret ballot in the extraordinary circumstances prevailing on the morning of the Tamil Nadu trust vote day on 18 February 2017. The text of Tenth Schedule itself is the sanad for this humble contest.

Section 3 of the Anti-Defection law says as follows:

“Where a member of a House makes a claim that he and any other members of his legislature party constitute the group represent a faction it which has arisen as a result of a split in his original political party and such group consists of not less than one third of the members of such legislature party,

(a) he shall not be disqualified on the ground that …

[dropcap color=”#008040″ boxed=”yes” boxed_radius=”8px” class=”” id=””]N[/dropcap]ow, it is this writer’s contention that O. Paneerselvam, the incumbent chief minister till the swearing-in of Edapaddi K. Palaniswami, had all legal and moral right to make the claim that he had at least one third of his legislature party with him, considering the “imprisonment” under coercion being the talk of the town. As such, he could not have suffered from disqualification. And what is crucial to note that the above cited provision of the Anti-Defection Law demands not less than one third of the legislature party (emphasized in bold letters above) and NOT one third of the legislature as put our by the senior advocate in his article cited earlier.

The pity of it all is that Speaker Dhanapal, the real villain on the floor of the House, has got away with the gang rape he caused…

Consider the numbers. One third of AIADMK’s total strength of 138 is 46. Thus, with the total support of the DMK and the Congress, what was required was just 35 of the 100-odd willing but  “imprisoned” legislators to supplement Paneerselvam’s known team of 12 to throw out Palaniswami, and wait for better days that would come without the ghost of the female prisoner in a Bengaluru jail making candles. No defection by law in that arithmetic.

Hence, if P.Dhanapal, the Speaker, had been as democratic, mature and decent as he was at the star of the Assembly that day, the trust vote rape could just not have happened, and the essential morality of democracy would have rewarded Paneerselvam, while probably destroying the Sasikala ghost which now shadows the AIADMK government.

The pity of it all is that Speaker Dhanapal, the real villain on the floor of the House, has got away with the gang rape he caused — got away without even being questioned.
Note:
1. Text in Blue points to additional data on the topic.
2. The views expressed here are those of the author and do not necessarily represent or reflect the views of PGurus. 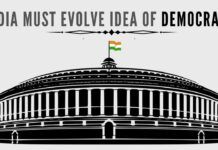 The Caste-Jihad: From the ancient to the present – Part 7