The indomitable Sitaram Goel, in ‘How I became a Hindu’ describes how some Sadhus had gone to request Nehru for a ban on cow slaughter. They were very excited. India had just thrown off the yoke of imperial rule. Both Nehru and his sister slapped the Sadhu. How dare some filthy, uneducated, half-clothed Sadhus, make requests of the self-proclaimed ‘Shandaar Aadmi’ (grand man).

To an average Hindu who considers our Rishis and Sadhus as the repository of ancient wisdom and knowledge, someone worthy of respect, this is surely shocking.

But how did we get here?

In 1835, was passed the ‘English Education Act.’ Macaulay says ‘a single shelf of a good European library was worth the whole native literature of India and Arabia.’ With this scant regard for the natives, was restarted the serious ‘browning of the sahib.’ Thus far only the land had been looted and the body subjugated. But now was started in serious earnest, the colonization of the mind.

The Muslim leadership turned the madrasas towards even more strident theological doctrines for the lower class – ‘Ajlaf.’ However, similar to the tony Nehru, the Jinnahs of the world studied in Christian Convents and Colleges in London.

Most of our later freedom fighters and national leaders were those with education in English, preferably in foreign lands. For, who else, could discourse with the Gora sahib?

It is but appropriates we quote a foreign author to make a respectable point today. For what else will resonate deeper? There are many wonderful sources that describe the size and scale of our ancient universities and seats of learning[1]. Nothing in the ‘Western’ world comes even remotely close in terms of antiquity and greatness. Certainly not in England.

But the onslaught on these ancient temples of learning had started in right earnest centuries ago.

“The conquest of India is the conquest of culture by those who lacked it,” said the great K M Munshi. The great seats of learning were wilfully destroyed[2]. When Mohammed bin Bakhtiyar Khilji demolished and burned Nalanda University to the ground in 1193 AD, it reportedly burned for months together. It housed more than 9 million books. It boggles the mind to think about a library of this size in the medieval age. To put this in perspective, it was more than 300 times the size of any other contemporaneous library anywhere in the world.

The Muslim invaders introduced the system of education through ‘madrasas’. The teachings were based on Islamic theology with some secular subjects as well. Unless you were educated in a madrasa you could not get a government job. But with the advent of Macaulay and company, from 1844 madrasa educated graduates were banned from government jobs. Before we become wild cheerleaders, it is important to note that it was to instill English and Christian-ness into the native. The Muslim leadership turned the madrasas towards even more strident theological doctrines for the lower class – ‘Ajlaf.’ However, similar to the tony Nehru, the Jinnahs of the world studied in Christian Convents and Colleges in London.

Seeing the brown sahibs he looks up to holding his heritage in scorn. Well, you might think the Hindu was finished. You would also be very wrong. The worst assault was yet to come.

Now there is a picture. Brown Sahibs like Nehru, Jinnah holding uneducated natives in scorn, sitting across the table with the English sahib and deciding how to carve up the map. How dainty and sporting mate!

Lest we forget the topic of forgetting, Dharampal has this to say in “The Beautiful Tree”. “The most well-known and controversial point which emerged from the educational surveys lies in an observation made by William Adam. In his ﬁrst report, he observed that there exist about 1,00,000 village schools in Bengal and Bihar around the 1830s.” This is true for other states as well. The Hindu temples were not just places of worship, they were for secular activities as well. Dance, drama, philosophy, storage for grains during floods, and of course education. People of all castes studied together. This busts another myth by the Christian propagandists for the colonial empire. The Hindus weren’t all rascals, rogues, and freebooters that Nehru’s fellow old school harrow boy and British PM Churchill made us out to be.

The Imperial English, as with the other colonists like the Dutch, Portuguese, Spanish, or French across the world, wanted to spread their Christian love. This was the pound of flesh extracted by the Church for the commercial exploitation by the Monarch. For example, the Portuguese inquisitor massacred tens of thousands of Hindus in Goa[3]. Hindus ran from the temples with their beloved idols. Christian Sunday school was compulsory.

The British granted land, money, and a variety of favors to Christian schools. None of these schools are under any ambiguity about their role even today. This is a picture of a school in Chennai in modern secular India.

Equally disturbingly, they injected a sense of deep inferiority amongst us. The Wood’s dispatch of 1854, as an example, positioned English as ‘elite’ and the vernacular as inferior. It recommended a hierarchy for education levels. At the bottom, were primary schools in the vernacular medium. Above that, at the district, were Anglo-vernacular high schools. English was a medium of instruction for higher studies. My grandmother, a remarkably smart woman, would say something astoundingly smart. When complimented, she would be immediately defensive and say “Oh! But I am weak in English”! How many of us would look at someone who doesn’t know English very well and still say on first impressions, that the person is smart? Or that a person who has a fluent grasp of English, is of limited intelligence? The idea that knowing English and a person’s worth is inextricable has been so deeply rooted in us.

So, the Hindu has had his grand universities destroyed.

Been subject to increasing imposition of Muslim theology and Arabic, Persian, Urdu for over 800 years. Told that a single shelf of European books was greater than all the ancient libraries. Has had it seeded deeply into the psyche that a foreign English based Christian education is better and vernacular is ‘low-level’. Damn his soul.

Seeing the brown sahibs he looks up to holding his heritage in scorn. Well, you might think the Hindu was finished. You would also be very wrong. The worst assault was yet to come.

Nehru’s first HR minister was Maulana ‘Mir-e-Karawan’ Azad. It wasn’t enough that he was a Maulana born in Mecca. It wasn’t enough that he was hardly an educationalist when towering intellectuals were all around him. The caravan leader to Nehru was “a finished product of the culture that, in these days, pertains to few”. Who’s culture exactly? As opposed to the filthy sadhu, of course. A ‘Maulana’ is a title of a Muslim religious scholar who has studied under other Islamic scholars. Similar to Rishi or Swami, under a particular sampradaya. Muslims demanded they couldn’t live with Hindus. They got their separate land. The ill-planned partition resulted in millions of Hindus dead. And we name a Maulana as our education minister. Irony died.

Hindu schools are caught in a bind. They try to position the teaching of their books like the Bhagawat Geetha, as ‘values training’ and keep tripping over legal barriers in Hindu ‘sthan.’

We celebrate 11th November the birthday of the great Maulana as ‘National Education Day.’

But the first weapon for the communists was education. More precisely re-education.

The communists who were licking their wounds after opposing the Quit India moment didn’t have to wait long. In came Indira Gandhi who would do anything for power. The deal the communists wanted was, of course, to control Education and History in return for supporting Indira. Enter among others Nurul Hasan as education minister[4].

But it wasn’t enough to target the education system alone. Arun Shourie’s brilliant ‘Eminent Historians: Their Technology, Their Line, Their Fraud’ incisively captures the systematic destruction of the Hindu identity and memory of history.

Despite the countless assaults, India at independence had tens of thousands of smaller gurukuls. Also, temples were in the hands of the community. Not the government. So some semblance of Hindu education happened at these places.

But now we had the perfect storm. 3M: Muslims, Missionaries, and Marxists out to re-educate the Hindu. No single sphere has been left untouched. School certification boards, universities, accreditation bodies, institutes, history, think-tanks – have all been deeply corroded.

The number of gurukuls now number in the hundreds, if that. The big temples, which played a big part in education are under government control doing little for educating the Hindu child. The number of madrasas increased from about a hundred at independence to about 500,000 by 2006 and is flourishing[5].

Christian schools are in prime locations across the country, courtesy their colonial legacy, and are multiplying for all to see.

What is perfectly perverse is that Christian and Muslim schools teach their theology in schools. Example: Christian schools teach Catechism to Christians and ‘secular‘ moral science to others.

Hindu schools are caught in a bind. They try to position the teaching of their books like the Bhagawat Geetha, as ‘values training’ and keep tripping over legal barriers in Hindu-‘sthan.’

As part of the New Education policy or even as a general guidance circular, the government must introduce something to the effect:

“Schools can if they so choose, teach a specific religious theology of their choice but must make available classes around secular moral science in equal measure to those who so prefer.”

If we have neither temples nor schools for regular interactions and education as a ‘Hindu’, then we cannot dream of a renaissance. If such a circular were sent or policy change effected, an entire ecosystem with several scholars/publishers might arise to teach Hinduism in a unifying way.

This is the least we can do to set right the history that keeps slapping us on our faces.

Please Act. Sign this change petition http://chng.it/gMhythLkKc Speak to your local political representative. Educate others on the need for Hindu education.

[2] How these ten great universities of India were destroyed by Islamic invaders! – Dec 29, 2017, Postcard 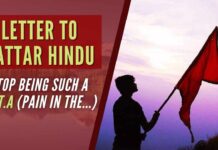 My New Letter Series – Dear Kattar Hindu, Stop Being Such A P.I.T.A (Pain In The…) 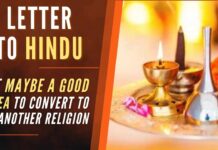 International Men’s Day – A day to remember our Fathers, Husbands,...