The tax cuts for the rich proposed by the two leading Republican candidates for the presidency – Donald Trump and Ted Cruz – are larger, as a proportion of the government budget and the total economy, than any tax cuts ever before proposed in history.

Here are 5 things you need to know about their tax plans:

Bottom line: If either of these men is elected president, we could see the largest redistribution in American history from the poor and middle-class of America to the rich. This is class warfare with a vengeance. 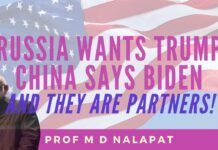 Donald Trump Junior takes a dig at the Bidens, calls them the most corrupt political family in US

Is Austria headed for a recession?