Big victory for India; Sanjay Bhandari to be extradited to India from the UK

Fugitive middleman Sanjay Bhandari’s days in London are numbered now with a United Kingdom-based trial court ruling for his extradition to India on Monday. Bhandari was Congress supremo Sonia Gandhi’s son-in-law Robert Vadra’s associate and was involved in arms dealing and middleman activities in many controversial deals involving tax evasion and money laundering.

Sanjay Bhandari (60) was caught on the radar of agencies in mid-2015. He was continuing his shoddy activities during the BJP government which came to power in mid-2014. He was interrogated by agencies and was caught for communications with Robert Vadra regarding the furnishing of a newly bought apartment in London. But somehow in mid-2017, Bhandari managed to flee to London via Nepal. It was well known that his friends in Delhi helped him to cross to Nepal via road. PGurus published a series of reports on the dubious activities of Bhandari and his links in Delhi.[1]

Bhandari faced two extradition requests from the Indian authorities, the first related to money laundering and the second to tax evasion. District Judge Michael Snow, who heard the case at Westminster Magistrates’ Court in London earlier this year, concluded that there are no bars to him being extradited and decided to send the case to UK Home Secretary Suella Braverman, who is authorized to order the extradition based on the court order.

“As I am satisfied that extradition is compatible with the defendant’s Convention rights, I must send this case to the Secretary of State [Braverman] for a decision as to whether the defendant is to be extradited,” Judge Snow said in his judgment.

“However, I only do so on the basis of the Assurances that have been provided by the government,” he said, with reference to Indian government assurances that Bhandari will be held in a separate cell at Tihar Jail in New Delhi with relevant healthcare provisions while he faces trial in India. The judge also concluded a prima facie case had been established with respect to both extradition requests.

“He failed to declare his overseas income and assets…He benefited from the income and assets that had not been declared. A reasonable jury can properly infer benefit from his undeclared income and purchase of substantial assets overseas,” the judgment reads. The Indian government’s extradition request for Bhandari had been certified by then UK Home Secretary Priti Patel in June 2020 and he was arrested on an extradition warrant the following month that year.

Sanjay Bhandari has been on bail on security provided to the court as he fought extradition on the cases against him by the Central Bureau of Investigation (CBI) and Enforcement Directorate (ED) and is expected to appeal against Monday’s magistrates’ court order.

The UK’s Crown Prosecution Service (CPS), on behalf of the Indian authorities, argued that Bhandari’s conduct amounts to “fraud by false representation” in the British jurisdiction. Bhandari’s defence team had sought to argue against the prima facie case and also on human rights grounds, claiming a “real risk” that he would be subjected to torture by the police and of a breach of Article 3 of the European Convention of Human Rights (ECHR) rights because of the conditions in Indian prisons, from “non-state agents and from the prison guards”.

“Assurances have been given in this case. It is the government’s case that the defendant will be held at ward No. 4 Central Jail No. 3, Tihar Jail Complex in New Delhi,” the judgment notes. “India is a friendly country governed by the rule of law. I have not to be made aware of any assurance that has not been honoured,” it adds.

[With Inputs from PTI] 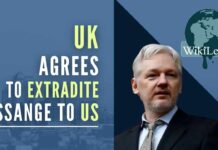